Life in a Marital Institution at Soho Playhouse 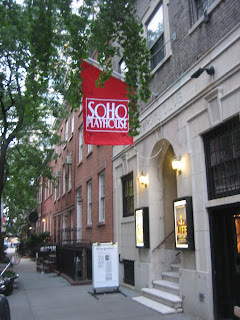 Last night, my friend Elaine and I went down to Soho to see Life in a Marital Institution. We emerged from the C train at Spring Street and stepped into another world, which was a welcome relief from the opressive heat and humidity of midtown where we work. Our desitination was the Soho Playhouse on Vandam, but first we detoured to the Hundred Acres Restaurant on Macdougal. It was also a retreat from the normal and was one of the best restaurant experiences I've had in Manhattan. We both indulged in the grilled rabbit with a salad of arugula, cherries, grilled red onions and almonds along with glasses of white wine. The total bill was $35 each. Wow! The dinner was unbelievably good. And the service was impeccable. It's near the corner of Prince and MacDougal. Go there.

Now on to the show. James Braly presented this work in about hour. It was a cross between stand up and a one man presentation. It's the parallel stories of his long courtship and eventual marriage to his wife Susan and the death of his sister Cathy, delineated by stage lighting changes, which made it sort of a play. The analogies he drew were hysterical and I found myself drawn into this absurd tale of love and hatred. He's married to the kind of woman I can't understand - all organic, new age, alternative spiritual seeking, living off the land, uber educated, nuevo hippie with too much money - and it seems that he couldn't understand or stand her either, but he loves her enough to live with it. They spent most of their courtship and their marriage in counseling but never gave up. It's ridiculous but he finds a way to embrace relationship, stay monogomous and committed to their family. I got the sense that he found a way to laugh instead of cry. James is on the verge of being a silver fox. His hair is already there, but he's still a mite young. He cracked himself up and had the audience eating out his hand. It was altogether entertaining.
at 8:16 AM

Sounds like a great time! The block where the playhouse is located looks gorgeous! That dinner sounds fab too!