A Week of Rest for Girl Entertained

As Sieglinde says, its Broadcast Eve. The radio waves will be filled with those gorgeous American sounds. It will be a Tragedy indeed if my recorder fails. I'm supposed to be packing for my "I'll be Home for Christmas Week of Rest" but instead I'm watching Flicka and Bryn get down with the Mormons.

Speaking of the Mormons, La Diva Renee just enjoyed a three show gig at the Tabernacle and nearly blew the roof of the dump. 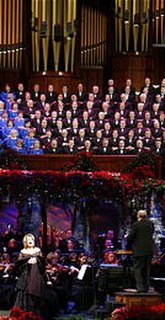 TBVers are speculating on a Chrismas album from Renee and the MTC - why shouldn't she get one? Dame Kiri and Marylyn Horne got theirs. Dare we dream of a dvd too? The obsessive compulsive collector of All Things Renee must have a copy of it. Do you think the Mormons bootlegged it? And did you hear? The Family Von Fleming Singers are taking it to the road. Renee's dad Edwin Fleming conducted the MTC in the Hallelujah chorus and in Rochester, her sister Rachelle joined her on stage for "Abends will ich schlafen gehn" from Humperdinck's Hansel and Gretel.

Meanwhile, TBVers are emptying their piggy banks in hopes of winning the bid for a lesson with the Beautiful Voice herself.

In related news back home in West Texas, local sleuths were hired to search for the classical station that will air the Tragedy. This lead to phone calls betweens Midlanders about who exactly does have six degrees to Susie. It turns out that Susie called my sister MF's friend FJ's nephew when he wanted to major in music. And then sadness ensued for those without high speed cable internet, the classical radio station doesn't come in very well over the airwaves since it has to travel from New Mexico across miles of sand dunes, pump jacks and all of those tall buildings.

Across town, Fanadettes are plotting their next trip to see their diva Bernadette in Atlantic City in February...
at 8:17 PM

Email ThisBlogThis!Share to TwitterShare to FacebookShare to Pinterest
Labels: Texas