What did happen here? 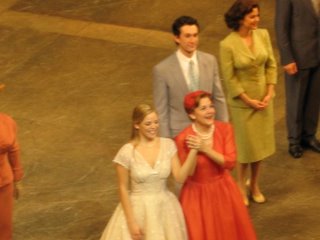 Critical acclaim happened here. Six Tonys happened here. The Light in the Piazza happened here. Is it an opera? Is it a Broadway musical? I'm not sure it can be labeled as it has elements of both. It employs a romantic melody and operatically-trained voices but the story is ultimately moved by the book. Tony winner Victoria Clark is as consumate as ever as Margaret and Katie Clarke as Clara is shining in her Broadway debut. I was fortunate to catch The Light again this evening. This was my first chance to see Katie in the role. She is a lovely actress and is already owning the role after replacing the sublime Kelli O'Hara. Her voice is still growing but she's quite strong. I can't imagine what Victoria's next role will be - how will she top this performance? She inhabits this character completely with humor and grace. This passionate run is slated to end in March 2006 and I do hope I will be able to catch it one more time. http://www.lct.org/calendar/event_detail.cfm?ID_event=34551107
at 11:18 PM