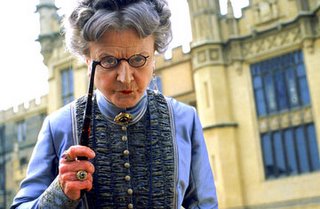 After making a much too early in the morning for me trek to the ABC studios at 66th & West End for an appearance by Angela Lansbury and Emma Thompson at "The View" yesterday, I was confronted with a huge NO TAPING TODAY sign. Of course I was disappointed and mostly angry that the website of "The View" indicated that there was a live taping (those bitches). I was set to actually meet Angie in person. I did watch the taped interview - and it was not that great - the hosts were blabbering on so much that there was very little time for a an actual question. Angela looked great - beautiful, tall, straight, regal - really unbelievable that she is 80 years old. She did sing just a bit of "Beauty & the Beast" - she sings it as a story and it is so lovely. You could tell that Emma Thompson has great respect and love for Angela. Emma has been making the rounds on all the talk shows to promote Nanny McPhee. She is damn funny and is looking quite glamorous lately. I really love her work - I believe she is Britain's answer to Streep (check her out in The Remains of the Day or Howard's End). I bided my time through the ridiculously long Friday workday and then fortunately attended a great performance by my friend JayDee in her cabaret act at Danny's on 46th Street. I then ran to 42nd Street to catch the 9:45 showing of Nanny McPhee . One of the fun things about seeing a "kids" movie in New York (although I rarely go to the movies, a fact about myself that was established a couple of weeks ago) is that New Yorkers see no need to drag kids along for appearances sake in order to enjoy a fun movie. Also New Yorkers tend to talk back to the characters and always show their appreciation at the end if warranted. This was one of those times. The audience did love it - there were lots of laughs, called-for groans, sighs and much applause at the end. A knarly-looking Emma Thompson was fantastic as the strangely magical nanny, although she was no Mary Poppins or even Maria Von Trapp. The children were darling and who can look away from Colin Firth...but the scene stealer of the movie was definitely Angela Lansbury. In a quite demographically-mixed crowd of adults, she received the most laughs and applause. This was definitely a delightful movie and I can't wait to own the dvd.
at 12:36 AM

Isn't the oldest boy the one from Bobbie's Girl?