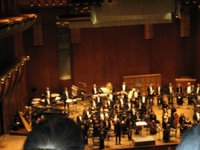 Tonight we were in the presence of Joshua Bell with the NY Phil! Joshua played the Concerto for Violin and Orchestra, "The Red Violin" by John Corigliano. Joshua plays the voice of the violin in the movie of the same title. Joshua's playing is glorious, fierce and romantic. He plays with his whole body. It was also Jonathan Nott's New York Philharmonic debut as conductor. The Phil played R. Strauss' Eine Alpensinfonie. It is a rather long piece without Nott conducted without the score. He displayed an impressive stamina as the piece is rather long and h 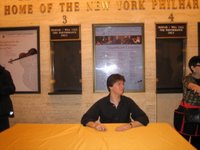 as no breaks between movements. The Phil were able to show off their abilities to play unusual instruments including a Hecklephone, which looks and sounds like an overgrown oboe, four Wagner tubas which are a type of French horn and an interesting variety of percussion such as a wind machine and a thunder sheet. Afterward, Joshua had a cd signing and I had him sign my new Tchaikovsky album. I told him that it was a real bonus seeing him at the Tribeca Film Festival screening of Ladies in Lavender with Maggie Smith - he is the voice of the violin in that wonderful movie as well. I'm still smiling.
at 4:43 PM