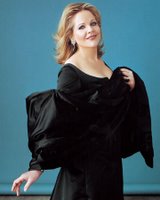 Renée Fleming's people issued a press release stating that she has been replaced by Cecilia Bartoli in this Friday's mega concert celebrating Mozart's 250th birthday. Renée's most ardent fans have intelligently and emotionally questioned this move by the Mozarteum. The only thing stopping the TBVers from throwing rotten tomotoes at the event is that it is taking place in Salzburg; and well also, that La Diva wouldn't approve. Speculation is more rampant than wild fire and bloggers are full of questions here and here. Even Oestreich at the New York Times has raised questions. This has all of the sordid makings of a Vh1 Behind the Music. The Diva herself, ever classy, has taken the high road in placing the blame on herself rather than act like a pop culture diva. Note to self: cancel the timer on the creative recorder.
at 4:27 PM

hey, that was the original title for my post on this subject! great minds think alike, eh?