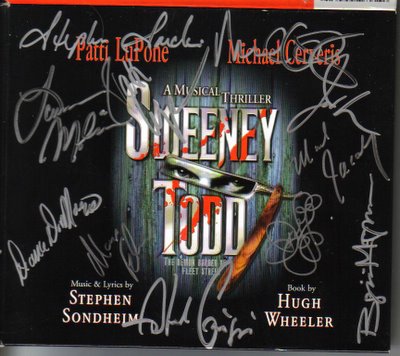 My friend Noah said to me, "First you met Angela Lansbury on Saturday night and now Sondheim tonight - WHO ARE YOU? NO, REALLY, WHO ARE YOU?!?" Well, I'm the ecstatic entertained girl these days. I must say I am feeling a bit charmed.

Kari (who understands) and I were in Row R right in front of the soundboard. As usual, the show was brilliant - everytime I see something new and I continue to be enthralled. I went out at intermission which was about 8:30 to doublecheck the post-show cd signing procedure. There were two lines outside - one for non-patrons and one for patrons. There were already about 50 non-patrons lined up. As soon as the curtain call started, Kari and I headed outside (it seemed sacrilegious to miss the curtain, but this was a higher calling). I was # 1 and Kari was # 2 in the patron line. We were THE FIRST TWO of of over 1000 fans to go inside to meet the Master and the cast. We walked down the middle aisle to the stage and climbed the steps - it was almost too much to be on an actual Broadway stage. The cast was lined up across the stage at tables and there were photographers and news cameras everywhere. Lauren (Johanna) and Diana (Beggar Woman Lucy) recognized me at once. Diana told John Arbo (Fog) that this was my umpteenth time - I said 14th and they were all amazed. Michael Cerveris (Sweeney) recognized me then and said hello. Then came the Master. Mr. Sondheim was soo nice! He was seated between Michael and Patti LuPone (Mrs. Lovett). 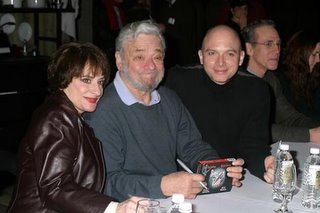 I showed him my "Wall to Wall Sondheim" poster and told him that I brought it before I knew the rules and that I understood that he couldn't sign it - he said he was sorry. I told him it was the best day of my life and he, Patti and Michael were all laughing and saying that's great. Then Mr. Sondheim said thank you and "so you were one of those who stayed the whole day and wouldn't leave!" I said that's right - that I couldn't be thrown out - and he laughed. Previously I just knew that I wouldn't even be able to mutter hello or thank you to him, but I guess the Angie encounter has dispelled all fear I have. It was just so exciting to meet The Musical Genius - arguably the most important contributor to American musical theatre of the 20th century and who will undoubtedly continue to be celebrated throughout centuries to come.

Kari and I think that the two of us might be in a picture or maybe on the NY1 show On Stage - wouldn't that be something? I was the first fan on stage and I know my face was just one big smile! When we came outside, the people in the lines were cheering for us and we showed off our "signed by Sondheim" cd's around. What a feeling! It's only February 1st, what in the world do the next 11 months have in store?! 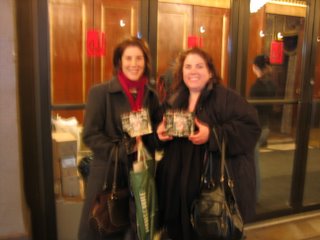 I'm so glad I got to see you yesterday. Congrats on being the 1st in line. What a thrilling experience!
Renee