I walk along every road just like royalty, people bow, they kiss my hand, because my beauty makes me a queen! My horses gallop along, great men step forward, their hats raised in honour of my adventurous life, I am beautiful, I am happy! I am beautiful! Everything must blossom around me! I go straight to everything which takes my fancy! And if Manon were ever to die, my friends, it would be while she was laughing! Ha ha ha ha!

This is one of my favorite operas - I love the naughtiness of the girl, her angst in deciding between love or money, her power over men, her devil-may-care attitude....and then her heartbreaking defeat. The house was packed, save for a few no-shows, and was thrilled at the perfection. Massimo Giordano made his Met debut as the Chevalier, and it looked as though Renee had no problem working with a novice as her co-star. Bravos were plentiful throughout the evening. Renee's "Adieu, Notre Petit Table" was the most beautiful and the chapel scene was fraught with longing and sex. Ah, it was all breathtaking. 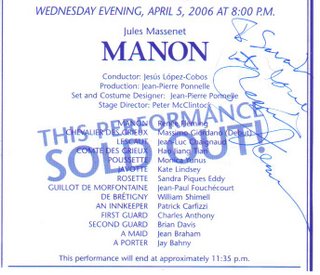 The backstage scene was wild and practically rowdy. The Beautiful Voice Group was well represented by Wanda, Mim, Iris, Jen and her Lani, Eric, Erin, Melanie and her friend, me and my friend Milda. It was wonderful seeing Jen again and meeting Erin, Melanie and Lani again. I was excited to know that Jen, Eric, Melanie and Lani are all going to see Sweeney Todd on Thursday night while the rest of us are going on Friday night - we're just all so in tune with each other!

Now on to La Diva! Renee was as gracious as ever and took time for pictures, although it was obvious that she was exhausted. Some backstage highlights I caught were: 1) her shoes were too big in the Cours-la-Reine scene and she nearly tripped coming down the stairs 2) she said yes to La Traviata in Chicago and Der Rosenkavalier at the Met and Baden Baden 3) she said Norma is a real possiblity 4) she said that she doesn't know if Saturday will be her last Manon because she loves playing her so much 5) Michael Stinchcomb, her hair colorist, came over to talk to us. He is wonderful and admitted to reading our TBV posts regularly to check out the fashion reports when she's on the road and laughed about somebody's comment that he looks like Neil Diamond (whom he does not look like nor wishes to look like).


When we told Renee that we would be there again on Saturday, she exclaimed "Oh I'll have to do better!" As if that's a possibility Renee! Oh what a grand night it was! 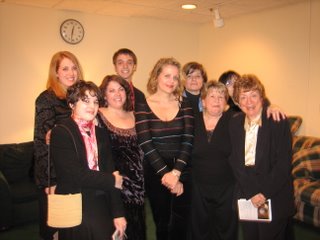 Now I digress, Mim, Iris and I started our day early enough. I picked them up around 10:30 at their apartment. While we were looking out their window, Mim was dismayed to see that it was pouring rain to which I replied, "that's not rain, that's snow!" We proceeded anyway. When we arrived in the lobby, I recognized a familiar face. My dear friend Amy was there with her little boy - they were at a playgroup in the building. It is always such a wonderful surprise to run into a friend in the middle of New York City. Mim, Iris and I then headed down to Rockefeller Plaza, the Museum of Modern Art and then up to the Met where we rendevouzed with Wanda and Sally. The five of us plus Milda met at Gabriel's for a lovely dinner and fun conversation before it was time to head back to the Met to begin the opera. It was a lovely day indeed. 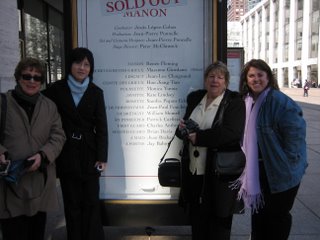 Tomorrow will be sightseeing and more time with new and old friends.
at 1:17 AM

It was so wonderful to see you, and everyone. Great photo! As soon as I'm back at home, I'll drop my account on TBV. Love to all!