Can you "Handel" it? 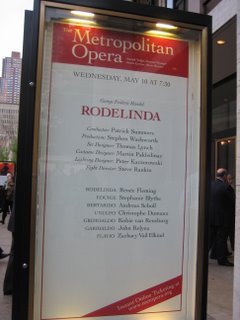 Tonight: Handel, RODELINDA, Met 10.5.2006; c. Summers; Fleming, Scholl (d), van Rensburg, Blythe, Relyea, Dumaux (d), Vail Elkind. This is NOT Handel's Messiah - this is four long hours of baroque harpsichord - this is NOT the thing I usually can handle. But two years ago when I purchased my first ticket subscription package at the Metropolitan Opera, I chose the package based upon the only chance to see Renee Fleming in an opera for the season. It was my first time to see Renee in an opera. The big night finally arrived months later on December 22, 2005. My subscription partner bailed after the first act, declaring it Boredelinda (he was theretofore FIRED). True, the first act was, um, slooowwww. I, however, am no quitter (contrary to rumor spread by high school spelling bee coach) and I soon tuned out the droning of the harpsichord. The second and third act were worth the wait - the love duet between the reunited Rodelinda and her presumed dead husband King Bertarido was enough to make me swoon - think back to Endless Love at your 8th grade prom! So now, almost 17 months later, I'm finally seeing Rodelinda again - this time from a slightly closer view and oh, I do plan to swooooooon again.

19 hours later. Well, it happened. I swooooooned. Couldn't help myself. First things first: Barbara Cook was there! Okay, overture, curtain call, on with the show. It struck me that this was the perfect opera at which to sit close: a minimalist orchestra lent itself to the sheer beauty of the sound and allowed the voices to transcend all the vastness of the Met . I quickly forgot the harpsichord and let the strings lift the voices. The cast was oh so cohesive and the acting was superb. Everybody seemed to be touchy-feely - it had the feeling of a long running closely knit cast and was as smooth as butter. Andreas Scholl was as hunky as they come and his high countertenor didn't shock me as David Daniels' did last year. He exuded sexy manliness. Stephanie Blythe was ever the scene stealer. Renee Fleming's acting was better than ever - I actually believed her husband had died when she was mourning him at his grave - and her voice was in fine shape (until her last aria in the final library scene - she said she caught some dust or something - but it did not take away from the gloriousness of it all). Rodelinda is grand yet quiet, sad but humorous, painful but joyous. The final scene almost has a Broadway happy ending - the bad guy has been killed and there is a Reunited, Feels So Good/We are Family chorus that ends the final act.

The backstage scene was business as usual. Michael was there as well as a number of patrons. Mark O'Connor (fiddler extraordinaire) was also there and I struck up conversation with him. He recorded another song with Renee for her upcoming Christmas album. He has another album of his own coming out soon as well. Renee told some fellows we met that she may do Ariadne in a few years because her voice will be lower. Renee had a haircut since I saw her last and looked marvelous. She was ready to go out on the town.
at 6:34 AM

Sigh...can you tell I'm crying a little at having to miss tonight's performance? Have a marvelous time with the swooning!