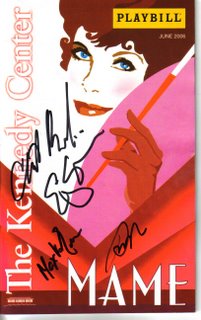 Until I can successfully time travel, the original 1966 MAME will live in my imagination. From everything that I've read, I believe that it was possibly one of the most glorious productions to ever be staged. That being said, the Kennedy Center MAME is wonderful. It is unfair to compare Christine Baranski, or anybody for that matter, to Angela Lansbury, but she does take on the role as only a leading lady can. She is graceful and statuesque, as well as bold, acerbic and wonderful. The costumes were vibrant and glamorous. Emily Skinner as Gooch and Harriet Harris as Vera Charles were riotously funny. The entire cast delivered. The book was hysterical and poignant. Although it lacks what I imagine to be some of the original thrills (Christine does not slide down the banister or hang from the moon), the staging was fun without being over the top - perfect for a large cast. I laughed and cried. The audience was very enthusiastic, laughing and even singing a long. It was indeed exciting to be there. Michael Riedel of the NY Post speculated in his column on Friday that the production is moving to the Palace Theatre on Broadway in mid-July. Christine told me at the stage door that "we don't really know since it is so expensive to move." Although an official announcement has not been made, it is ready and it should move. This has not been revived on Broadway since 1983, when Angela herself reluctantly returned to the role. If or when it transfers to Broadway, I will definitely see it again.
at 9:11 AM

Fabulous! How was it? Transferrable?