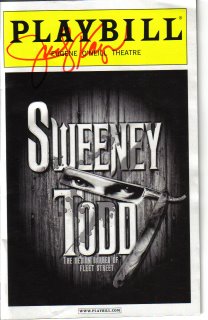 How could I resist seeing a temporary replacement in a Broadway show? More importantly, how could I resist seeing the fabulous Judy Kaye
in my favorite show? As Michael Cerveris said to me at the stage door, "It's like comparing apples and oranges, but you'd never know this was only her third performance." He was really saying don't even compare Judy to Patti LuPone (take it from him...he knows better than to try something like that). It was a revelation to see such a flawless performance. Obviously, Judy Kaye is a professional - a Tony winner with many shows under her belt, but Judy is only doing this for a week while The Patti is on vacation. It was fascinating to see someone just waltz in and join a cast as a substitute practically out of the blue and take it over like she had been doing it for months. True, she sang the role before in concert versions with both the original Sweeney Len Cariou and his replacement George Hearn, so perhaps the lyrics were in her head. She was right there with the cast for entire show, never missing a beat. She was engaging and engaged. She definitely didn't try to be The Patti. I found her performance to be closer to what I saw Angela's on the dvd, but it was her own as well. She reminded me of Patricia Routledge's Hyacinth, a tad pretentious on purpose, but always meaning well. Her Mrs. Lovett was dotty without being over the top with just the right amount of fierceness. She was precise in her diction and her high soprano was gorgeous in "Wait". She showed a more caring side of Mrs. Lovett, not quite as aloof. She is a consumate comedienne and had perfect timing tonight. By the way, Mr. Sondheim was in the audience.

(On the way home, I sat with Gregory Jbarra on the M104 and talked about bootlegs and his post- Dirty Rotten Scoundrel plans. He's moving back to LA and will be working on his house before taking up more tv work. Ho hum. I will miss seeing him around the neighborhood.)
at 12:49 AM

How did she handle the tuba and percussion?