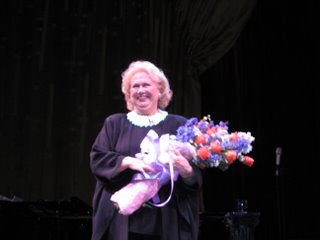 On January 20, 2006, I had the great fortune to attend Barbara Cook's concert at the Met Opera. I was on the second row and was stunned, simply stunned, by her artistry and beautiful voice. Yesterday, I picked up the CD
that was recorded live at the concert and WOW, this is the best souvenir. Here is a snippet of what Barbara wrote in the liner notes:

"I'm standing just behind the Great Gold Curtain. I see the patches where many, many hands have held back this curtain for Placido Domingo, Luciano Pavarotti, Marilyn Horne, Renee Flemign, Susan Graham, Karita Mattila, Rolando Villazon, Alagna, Gheorghiu, Rene Pape, Bartoli and on and on........

I don't believe this whole thing.

My entrance music begins, the curtain drapes open, I walk forward and three thousand seven hundred people rise to greet me. I hadn't expected that.
....
In preparing these notes, the phrase "a dream come true" came into my head, but I rejectd it immediately. This was not really a dream come true. I could never have invented this night: The Metropolitan Opera Association presenting Barbara Cook in an evenign of her own! For the first time in the Met's 123 years they were presenting a female non-classical singer. The last solo artist they repsented was in 1986 when Vladimir Horowitz played there. So, no, this is not something I ever dreamed of. But I can't tell you how grateful I am that it happened....

Now this part is for you Met folks......and for all you great singers. I want you to know how much I love what you do. I believe that when opera works it's the highest form of theatrical art. Everythign is there. There are so many great nights, so many moments at the Met that I will never forget."