Who is Jacques Brel anyway? 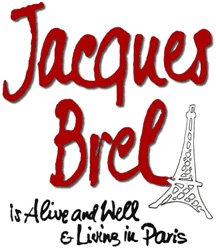 Last night I was treated to the wonderful musical review of Jacques Brel is Alive and Well & Living in Paris off-Broadway at the Zipper Theatre. I imagined it was like being in a small basement night club in Paris where an aging chanteuse performed her songs. There were four characters, an older man, a young man, the aging chanteuse and a young woman. It was as if we had all come in from the rainy night to take refuge and have a drink along with the performers. Although there was virtually no dialogue, they each had a chance to tell their stories, and occasionally their paths crossed during the evening. Sometimes I felt that the younger man and woman were representative of the older couple. Each song was a sad and beautiful story in itself. I found the entire show immensely pleasing. The cast was engaging and charming and the set perfectly lent itself to the nightclub feeling.

Noah and I rode with Natascia Diaz, who played the role of the younger woman, on the uptown bus. We talked to her all the way uptown to 59th Street. Of course, she was impressed with Noah's theatre knowledge. I will definitely be watching her career.
at 9:05 AM