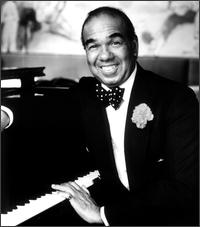 Okay, I don't really miss Bobby Short, but I do miss the idea of him. I first became aware of Bobby from his appearance in my favorite Woody Allen movie Hannah and Her Sisters. I don't really love his voice or style, but to me he embodied my idea of cool and classy New York night life. He had a regular cabaret gig at Cafe Carlyle for years and was a lauded New York City legend. I never saw him perform live before he died last year. This summer, I went to Cafe Carlyle for the first time - a place I had been dreaming about for over twenty years. I thought of him that night and smiled. Tonight I was reminded of him again when channel surfing...he was on an episode of 7th Heaven, probably one of the least cool tv shows ever. This was the show's one stab at cool and classy and I have to admit, they succeeded.
at 7:49 PM

Ah. Here's a roundabout for you: http://litwit.typepad.com/litwit/2005/03/on_bobby_short.html

I saw Bobby Short several times at the Cafe Carlyle and talked to him each time. He was really, really great, and audiences just loved him. He was the best modern-day interpreter of Cole Porter. His live album "Late Night at the Cafe Carlyle" captures the mood brilliantly - listening to the record will transport you there.