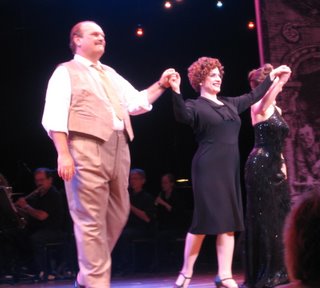 Noah and I arrived in beautiful Chicago with no trouble despite fears of security nightmares. We met our friend Karen for an afternoon at the Art Institute of Chicago. If one is to be properly Sondheimish, one must visit Seurat's Sunday on Le Grande Jatte. We looked at some other art, but this was the one that mattered. It was lovely sharing it with friends who understand. We then headed to Kari's place, who always understands. She is the chauffer du jour. She skillfully guided us to Ravinia on the North Shore to see Gypsy (actually I think her car automatically navigates itself there). We enjoyed a lovely picnic with Suttonhoo, Kristen and her mom...and we met Ravinia Bob, Gator and pod cast icon Billyboy.

The anticipation was inevitably high for what was to come from Patti LuPone. Finally, it was her turn to take on Mama Rose in Gypsy. Karen, Noah and I had seats near the back of the covered pavilion. The pavilion was a barn and unfortunately the sound system was in direct competition with the cicadas. I don't know if it was our seats or if it really was a less than exciting performance, but I just had the feeling that Patti was phoning it in. It was a solid performance but she didn't have sparkle. This is a show that usually evokes extreme emotions from me but I was feeling quite detached from it this time. At least, my friends Karen and Noah and I didn't think she did. It was difficult for us to keep from comparing Patti's performance of Rose to Bernadette Peters' 2003 performance (and for me, of course Angela Lansbury's). I tried hard to maintain a dichotomy and I mostly succeeded. I kept in mind that Bernadette and Angela are VERY different from Patti - the only thing the three have in common is that they are all Broadway leading ladies who often tackle the same roles (of course Angela was the first to attempt to recreate the role of Mama Rose). And thank God they are different, after all, Bernadette did say, "You've got to be original, because if you're like anybody else, what do they need YOU for?" Otherwise, it would all just be quite boring. I had higher than high expectations of the usually fierce diva Patti. I've seen her perform 22 times in Sweeney Todd, and not once have I been disappointed. I expected her to kick ass in this role. I kept thinking to myself, "Will the real Patti LuPone please stand up?" Still, it was Gypsy. God knows, I've gone on and on about it before. It still has a damn good book and the score is thrilling. So never mind...I'm not known for my never ending optimism for nothing and decided to look forward to a better performance on Saturday night. After all, they only had two weeks to put together a rather full production of a very demanding show - and come on, it couldn't exactly be easy to switch gears in the in the middle of her critically acclaimed run in Sweeney Todd.

On Saturday, Karen, Kristen, Kari, Noah and I took a lovely cruise on the Chicago River that highlighted Chicago's architecture (you know I always wanted to pretend to be an architect!). We then had a great lunch at Giordanno's - mmmm 10 lbs of cheese stuffed into a pizza. Then it was Gyspy redux. This was THE REAL PATTI LUPONE. Oh did she ever stand up! The group gathered again on the lawn for more wine and laughter. It's just too fun to meet people who are like-minded. On with the show. Our seats were upgraded to the second row (we sat on the same row with Lonny Price, the director) and oh what a difference! Karen, Noah and I debated whether the seat location enhanced our opinion of Patti's performance...perhaps, but only a smidgen. I really think it was the fact that Patti decided to turn it on. Her powerhouse voice sounded strong and beautiful on "Everything's Coming Up Roses" and "Rose's Turn". I was moved to tears because she did was she was supposed to do. However, that being said, she didn't necessarily bring anything innovative or new to the role...I don't think she had time to develop the role...but I'll take what I can get and she gave it to me. She received a well deserved thunderous ovation. It was so interesting to see such a difference in the overall production - everybody in the cast seemed better in their respective rolls. I am thrilled that I saw this performance on this particular night with these particular friends.

Three times is definitely a charm. Noah and I joined Kari, Kristen, Billyboy, Ravinia Bob, Gator and their delightful friend Jamie back at the Ravinia lawn. Our seats were further back but good. I spent some time celebrity spotting - Welz Kaufman, the director of Ravinia, Lonny Price, Alex Gemignani (out of Sweeney for the evening to see his Dad directing and his step mom as Elektra the stripper and of course, his co-star Patti). Patti had it all turned on again. It was just as good as it was on Saturday night. I can't get over the power that she has. It's definitely an event that I'm glad I didn't miss. The rumors are that she'll take this to London or perhaps on a limited regional tour or maybe this will be the Sondheim show that the NY Philharmonic does this spring in replacement of it's thwarted concert of Sondheim's Company. At any rate, Patti's Mama Rose deserves more than a three night stint on the north shore of Chicago. I can only imagine what she would do with month's of preparation. Time will tell.


Here are my pictures of the weekend: Pictures (coming soon)

Patti at the stagedoor: Listen for The Patti's schtick about seeing Wicked. Come on, Girl's got taste!

I love your review! And the youtube clips are fabulous!

It was great to meet you and Noah! I hope we make it to NYC again soon.

"HONEY! Are you out of your f***ing mind?" That's hilarious.

Sarah B! Alex was THERE? Damn! How did I miss that!

What night was the curtain call shot? We were in the second row saturday Night B 5-6 Maybe there was more then one bald headed guy up there!:) Lonny Price was two rows behind us in D Center. thanks for sharing the curtain call it gave me goose bumps again. And we must have been doin the same things. I took a picture of Sunday at the Art institute on Friday and we did the boat tour on Sunday!:) Now I just have to find Patti singing Rose's Turn and I will be a happy camper!:)