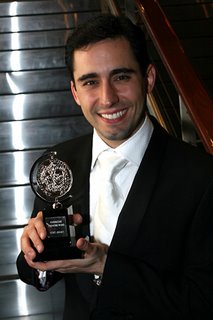 Yesterday I saw Tony winner John Lloyd Young, presumably on his way to the theatre to falsetto his voice through another show at Jersey Boys.

I've seen a lot of Broadway folks on this same New York block - a few who stand out in my mind are Jerry Mitchell, Norbert Leo Butz, Jesse Tyler Ferguson, the late great Jerry Orbach (the first celebrity I ever saw in NYC), Mario Cantone, Liz Callaway and Jenn Gambatese. I could tell you where this is, but then I'd have to kill you...but here's a hint, there's a Starbucks near by.
at 2:44 PM

Hmm which block this celebrity stalker wants to know?