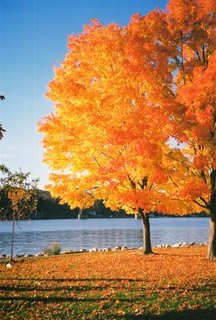 Oh it's a long, long while, from May to December, but the days grow short, when you reach September,

When the autumn weather, turns the leaves to flame, one hasn't got time, for the waiting game,

Oh, the days dwindle down to a precious few, September, November,

And these few precious days, I'll spend with you...

This is just one of my most favorite songs...the words, the tune, ah. Did you know that it was originally from a musical? It's from the 1938 Knickerbocker Holiday, book and lyrics by Maxwell Anderson and music by Kurt Weill. The political satire about New Amsterdam wasn't a hit and ran for only 168 performances at the Ethel Barrymore, but September Song, first recorded on the cast album by Walter Huston, lives on in many lovely incarnations. My favorite recording of it is from Willie Nelson's recording of it from his 1978 Stardust, which I bought for my dad on 8-track cassette. Stardust was reissued and released on CD in 1999 and is one of Willie's best. Of course, I wouldn't change the channel if I heard Ella, Frank or Sarah V. sing it either. I always break out this song at this time of year. Autumn is my favorite time of year; it's a time for getting together with friends, high school football games at home, a new season of shows, crisp cool weather and vibrant colors.

PS I took the picture of the tree on the bank of the Hudson River in Poughkeepsie two autumns ago.
at 7:23 AM

Julie Wilson used to do a very interesting version of "September Song."