She Shone Brighter than the Lone Star 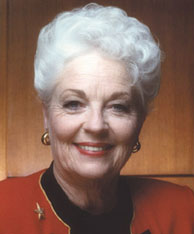 I just heard the sad news that Ann Richards passed away today. She was as shiney a Texan as they ever made, with a tongue sharper than a prickly pear cactus and a sense of humor that was grittier than a West Texas sand storm. She worked her ass off for Texans, and I'm not talking about the good old boys, oil barrons and ranchers, I'm talking about real Texans. I admired her as a politician, a Texan, a woman and most especially as a person. Rest in peace, Governor Richards.

Ann Richards will lie in state in the Capitol rotunda this Saturday from 9:30 AM to 8 PM and on Sunday from 9:00 AM to 8PM. The funeral and services will be held at the Frank Erwin Center, Monday at noon, and is open to the public. Her burial at the Texas State Cemetery will be a private ceremony.

In lieu of flowers, the family asks that memorial gifts be made to the Ann Richards School for Young Women Leaders, to open in August in the Austin school district, through the Austin Community Foundation, P.O. Box 5159, Austin, TX 78763, (512) 472-4483, or online at www.austincommunityfoundation.org.
at 11:15 PM

Email ThisBlogThis!Share to TwitterShare to FacebookShare to Pinterest
Labels: Texas

I was so sorry to read about her passing this morning -- God, we need more broads like her.