Take down your fishin' pole... 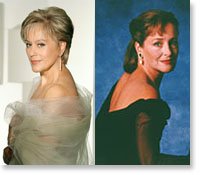 BY SANDRA OKAMOTO
Staff Writer for Columbus Ledger-Enquirer
How do you think opera stars Frederica von Stade and Dame Kiri Te Kanawa spent their vacation?
If you said fishing, you'd be right on the money.
Soprano Te Kanawa and mezzo-soprano von Stade spent several days on von Stade's boat off La Paz in Baja, Mexico.
Von Stade said they caught a lot of fish, including nine dorado, a large fish sometimes called mahi-mahi.
They were in her kitchen, cooking, and having a great time.
Von Stade says they've been friends since about 1969. They get together about once a year, she said.
People who are opera fans will come to see them regardless, but how to get others into the seats?
"You get schools involved," Dame Kiri said. "You have to start locally. Get lively groups together -- choruses -- get inspired."
"You have to take kids to performances," von Stade said. "It's a big and important responsibility."
On Friday, the two singers will conduct a workshop for young singers.
"This gives them (the young singers) a chance to perform," von Stade said. "What you learn in the classroom is different than performing."
Dame Kiri said the feedback the students will get will not necessarily be what they want to hear.
"Sometimes they want to know things like how much do we eat, do we exercise, small things like that," von Stade said. "They are so gung-ho. We can't hold them down."
Joseph Golden, who heads the opera program at Columbus State University's Schwob School of Music, is excited about the concert, but he's equally thrilled about the workshop.
"There is no finer experience for a young singer than to sing for and observe other young singers sing for artists of this caliber, gleaning pearls of wisdom gathered over the course of two remarkable careers," he said.
Both Golden and Earl Coleman, CSU's associate dean of fine and performing arts, have heard the two women in concert.
"I had the pleasure of meeting and hearing both Kiri and Frederica while I was on faculty at the University of Michigan," Coleman said. Their accompanist, Martin Katz, was also on the faculty there. "They both have exceptional and unique voices. Dame Kiri is known for her beautifully luscious and warm tone and Frederica has one of the most beautiful lyric mezzo soprano voices to grace the operatic stage."
Golden agrees. Dame Kiri "has been considered as the 'Mozart Soprano of Choice' in the opera world for many years. She is particularly well known for her elegant portrayal of the Countess in 'Le Nozze di Figaro.' "
Von Stade "always revealing her great musical warmth and excellent communication skills with her audiences," Golden said. "Her ability and, indeed, willingness to color and shade her voice in a myriad of ways has always provided her listeners with a panoply of enticing sounds and emotions."
"They both have also sung out of the bounds of operatic music, both venturing successfully into the realm of jazz and popular music," Coleman said. "Both are personable and eclectic singers. We are indeed fortunate to have such world-class singers singing in Columbus."

Khaleem was good enough to share this article with me since we'll both be seeing these Fishing Divas in Paris on October 21st at Theatre des Champs-Elysees!
at 7:18 AM