Barbara Cook is so much more than a glorious singer. Each song is a small bedtime story that lends to sweet dreams. I feel like she is giving me a rare gift so perfect that I just want to savor it always. She always lauds the composer and the lyricist and gives me a small master class. She caresses words and phrases with her sweet soprano voice that has just a smidgen of smokiness. Her top notes are still pure but when she visits her lower voice, it is luxurious raw silk. It's just unbelievable that this is the voice of a woman nearly 80 years old. Last night she introduced some songs that were new to her repertoire and treated us to a few of her signature songs. 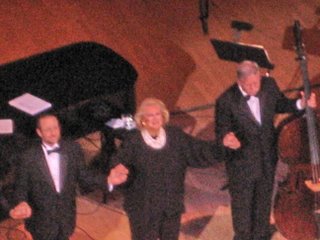 She opened with Something's Coming and I was thrilled to hear All the Things You Are and and This Was Nearly Mine. Thank God she did In Buddy's Eyes and I Wish I Could Forget You. She was joined on Make Our Garden Grow by Kelli O'Hara and Sebastian Arcelus along with various youth chorus and members of the NYC Gay Men's Chorus. Known for small lapses in memory which she usually turns into a delightful just between us joke, she didn't miss any lyrics last night until her encore of Anyone Can Whistle. She prefaced the evening with explaining that she is suffering from a windpipe infection and that four days ago she had no voice at all...but that she decided that rather than cancel, she would rather be there for us even at just 85%. We couldn't tell - which I told her at the stage door - we simply couldn't tell. It felt like 110%. At times, her voice broke on high notes, but it just added a dramatic touch. It is clear that her audiences adore her and she adores the audience right back. She manages to make me feel like she's singing right to me whether it was on the second row of the orchestra at the Met or the second row of the balcony at Carnegie Hall; I have a feeling that everybody there felt the same way. 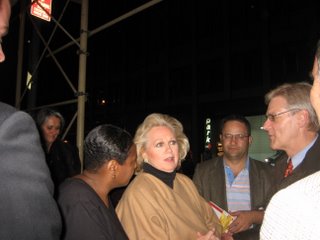 Wow! Awesome recap, Sarah. Great media, too. I feel like I was there!

Those clips are great. Thanks for sharing them. "Make Our Garden Grow" gave me chills.

OK I'll admit it, I am a Barbara Cook virgin, pleaaase don't take away my gay card though. Sarah your postings have allowed me to rise another notch up the cultural ladder of knowledge. Thanks I loved the clips. I am going out to get a Barbara Cook CD. Which one do you reccommend.

Oh dear - choose just one? Okay, then I choose "Barbara Cook sings Mostly Sondheim - Live at Carnegie Hall". This was recorded in 2001 and is absolutely wonderful. I guess my second favorite live recording of hers would have to be Barbara Cook's Broadway. Of course, I love the recent live at the Met recording because I was there, but it's not my favorite. You have to realize that Barbara has had a very long cabaret career so she does non-theatre songs that I would be glad to leave behind.

Thank you so much for letting me revisit this evening through your review. The video clips have me in tears... once again.

Bar none, the best concert I've ever attended.