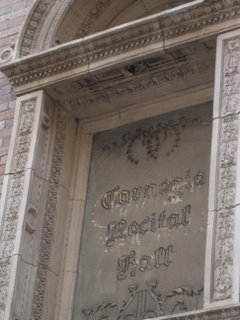 Oh what a brilliant evening. My boss bestowed two prime parquet tickets on me to see the BSO at Carnegie because he had the choice of seeing Audra McDonald in Pittsfield, MA at the Colonial Theatre and meeting her afterward. Sure, I'd like to see Audra too, but I would never turn down free tickets - especially to Carnegie Hall.

Bluebeard's Castle was intensely romantic. The majority of the piece featured Judith, sung by Anne Sofie von Otter. Her clear voice fluidly blended with the woodwinds to create an ethereal beauty. Her top notes were gorgeous and transporting. I did not know Dohmen, the bass-baritone performing Duke Bluebeard. His stance was authoritative and his voice was powerful but he seemed to lack range. It was all about Anne Sofie and the BSO this evening though. The BSO sounded sumptuous and elegant. They were absolutely perfect. Sitting in floor seats was fabulous but I missed watching the brass section, especially the horns. However, their anonymity was fascinating and I listened even closer than usual to their notes. During Bluebeard's Castle, a trombonist played from off stage, lending extraodinary power in his blasts. It was all quite breathtaking. 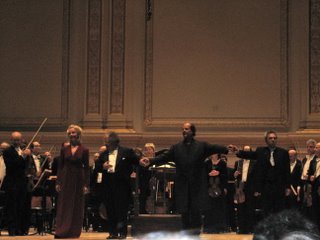