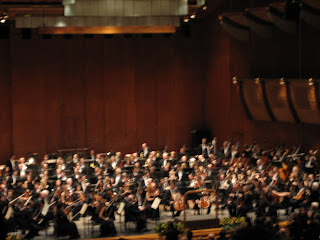 Last night, I attended a joint concert by the New York Philharmonic and Symphonica Toscanini in tribue to Toscanini, celebrating the 50th anniversary of the passing of Maestro Arturo Toscanini. Originally Renée Fleming was to perform with the Symphonica, but due to illness she pulled out. René Pape galantly stepped in and performed in her absence. The Phil began the concert with R. Strauss' Don Juan, a recognizable and beautiful piece. The most astonishing piece I've ever heard performed live was next on the billing - Symphonica Toscanini performed Respighi's Pini de Roma. It was glorious. The audience jumped to its feet, shouted and thunderously applauded. Never have I witnessed a symphony concert where the audience was so enthusiastic. Maestra Maazel then shared words about Toscanini and showed us the baton of Toscanini that had been presented to him by the Italian Embassy. With that baton, he directed the Symphonica Toscanini in Mascagni's Cavalleria Rusticana. It was gorgeous. After the intermission, a short film of Maestro Toscanini conducting the NBC Orchestra was played. It was interesting - the Maestro appeared almost ghostly in the black and white film, his only humanity coming when he had to whipe the sweat from his brown from his intense exertion.

René was galant indeed. He performed Verdi's "Studia il passo, o mio figlio!...Come dal ciel precipita" from Macbeth and "Ella giammai m'amo" from Don Carlo, and Mozart's "Madamina, il catalogo e questo" from Don Giovanni. The first time I heard René was at a concert of Schubert Lieder at Carnegie Hall. I attended the concert because it was my first opportunity to hear Renée Fleming live. It was also the first time that I heard such a powerful bass sing live. I didn't really like him then - perhaps it was the Schubert or perhaps it was because I only wanted Renée. Since then, I have heard René at the Met on three occassions - first in Faust, where he was wonderfully funny, second at the Volpe Gala where he gave us a preview of Don Carlo , and then in Don Carlo in December, 2006. I became a true fan at that point. His voice is so full and sensuous, so powerful and commanding. It was wonderful to hear him sing "Ella giammai m'amo" so beautifully again. It is a heartbreaking piece and he delivers it so well. Finally, the New York Philharmonic and Symphonica Toscanini combined on stage, I think the largest orchestra I've ever seen on a stage, to play Tchaikovsky's Francesca da Rimini, which was very satisfying.
at 8:13 AM

Sarah and I had a blast at this concert. The piece that Maazel conducted with Toscanini's baton was the Intermezzo from Mascagni's Cavalleria rusticana. The maestro mentioned that Toscanini loved to conducted this opera. I'll blog on the concert sometime tonight.

See, I was waiting for Of the Kosmos to come through with the Mascagni piece.