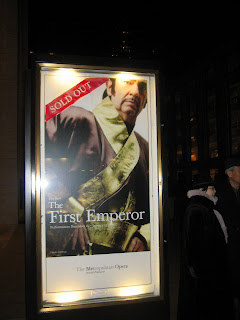 Dun THE FIRST EMPEROR, Met 25.1.2007; Dun; Domingo, Coburn, Heller. My first sentence: I loved it. I avoided the reviews and word of mouth on purpose, except two friends told me that it's one of those that you have to see to enjoy it. They were right. It is rather long, with only two acts and one intermission. The first act is very stark - it begins with the Shaman of the Emperor's palace telling the tale of what happened during the days of the First Emperor. He sings in Chinese, with a Chinese dialect. It is the time of the building of Great Wall of China and wars with invaders. The Emperor decides that he needs an anthem to inspire the people, so he frees a composer who coincidentally is his childhood friend. The Emperor's daughter and the composer promptly fall in love, which of course sullies the good name of the Emperor. The music of the first act is rarely melodic. Composer/maestro Tan Dun teases with hints of melody and quickly takes it away. However it is very rhythmic, with many drums and some traditional Chinese instruments. It is a bit too slow and takes patience, but I didn't want to miss a minute. It was interesting hearing the mix of traditional Chinese instruments and classical music. The cast is enormous - perhaps around 200, maybe more on stage. Placido was terrific, of course. It's hard to believe that his voice is one of a man who is nearly 70 years old. He has a very commanding stage presence - you probably all know this, but I have only been fortunate to hear him sing once before at the Volpe Gala. His voice is in great shape and rang out like a bell. The second act is beautiful. Finally there are melodies and the imagery is gorgeous. The scenery is still stark, but interesting with enormous blocks of "stone" which are moved from time to time to demonstrate the building of the Great Wall. The libretto is in English and I only found myself looking at subtitles a few times. I found the entire production riveting. Sarah Coburn as the Emperor's Daughter is perfect - almost ethereally thin and a great actress. She had a clear and sweet sounding coloratura. Marc Heller, making his debut, was really terrific as the composer. The costumes are vibrant - especially the Emperor's gold leaf robes. The house was sold out last night and the audience was very enthusiastic. I would definitely see this production again. 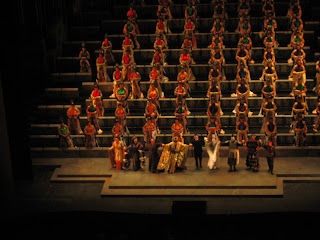