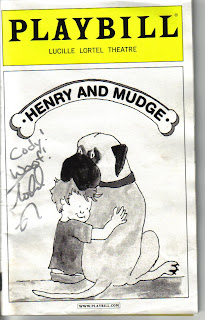 Tonight, Cody and I saw Henry and Mudge at the Lucille Lortell Theatre on Christopher Street. I wanted to see this new musical because my friend Todd Buonopane is playing Mudge, while taking a break from The Bee on Broadway. Todd is not only one of the nicest guys I know, he's also one of the most entertaining and fearless performers I've seen. Cody is a big fan of the Henry and Mudge books by Cynthia Rylant. This production is a quick 60 minutes and packed with cuteness and sweetness. Kids of all ages in the audience couldn't help but laugh out loud at the antics of Henry and his 182 pound dog Mudge. The hysterical Jen Cody provided support as Henry's pint-size precocious cousin Annie. Cody was thrilled to get Todd's autograph after the show.

Bonus celebrity sighting: Annie Golden was there.
at 9:43 PM