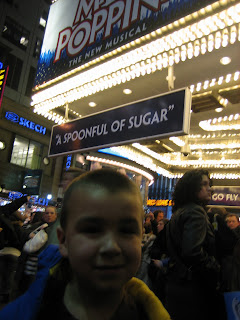 Finally I saw Mary Poppins tonight. It was practically, well, hmmm...perfect? No, not exactly perfect...but definitely practically charming, entertaining, fun, memorable. Unfortunately, Ashley Brown as Mary Poppins is just practically adequate. She wasn't as sparkley and magical as I hoped, but she has a lovely voice and to be fair, those were big shoes to fill. Gaven Lee as Bert practically stole the show with his Cockney accent and his wiry dancing. It was good to see Rebecca Luker as Mrs. Banks in so many scenes. She has a beautiful womanly presence. The rest of the cast was fine - I am always ambivalent about supporting cast and children - necessary bores, really. The production followed the book series by P. L. Travers more closely than the Disney film. The best scene came early on when instead of jumping through a painting for a jolly holiday, the children are treated to a walk in the park where the foggy London day turns into a sunny spring day and the marble statues come to life. It is a great scene. Later, the "Step in Time" sequence with the chimney sweeps definitely is perfect. The set was terrific - it was the first time I heard a Broadway audience applaud a set (it happens all the time at the Met). I have to admit that I teared up at the end when Mary came flying right up over us. It was practically, well, thrilling.

The best part of the evening? Hearing Cody laugh out loud so much and handing me his binoculars while exclaiming, "I want to clap!"
at 12:08 AM

Awww! Flying always makes me tear up, too. I'm a sucker for it. When Rigby threw her fairy dust on me a few years ago, I clapped and cried.

I loved your review of Mary Poppins, it was right on target. I loved that MP was a little darker than Disney.

That is great. I saw Sandy Duncan in a touring production at my beloved Saegner Theatre (which is probably gone for good) in New Orleans. I was five, and she flew right over our seats.