Who has that certain Je Ne Se Quois?

But of course, it's Susan Graham. Très Belle! Très Magnifique! Susan Graham's recital of French songs at Carnegie Hall was a tête-à-tête between her and each of the audience members. If you caught Susan at one of her concerts over the last three weeks, then you know it's true when I say she is someone who is beyond special. Not only does she possess a voice like a trumpet, she exhibits passion or humor as called for by each and every song. Charming is not the best word to describe her because she's so much more. She not only understands the depth of a song 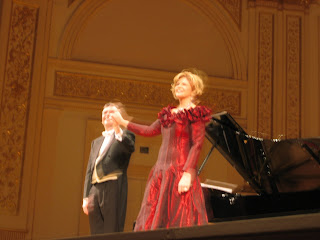 but makes sure that you will feel it too. Susan sings with pure joy. I waited well over a year for this recital and it was well worth the wait.

Because the the house was not quite full, Milda and I moved down to the front of the orchestra from our perch in the balcony upon signal from Sally, who was lucky enough to nab Maggie's ticket (Maggie, we missed you). We ended up seat squatting in the first row...after I had to push by Mr. David Hyde Pierce. Excuse me, Mr. Pierce, could you move out of the way so I can claim that front row seat before another squatter gets to it? What a thrill to be so close to the artist on stage. However, unlike other divas I've been privileged to sit so close to, Susan didn't make eye contact. She seems to be taking in every person in her vision. I don't know if it is her style of concentration or her complete involvement in the songs. Nevertheless, I was in awe to be so close to her. Susan sang Reynaldo Hahn's A Chloris as her encore. When the first few recognizable notes were played, there was a collective very audible sign across the audience. And not to leave us on a completely breathtaken note, Susan had to throw in Noel Coward's There's Something Fishy about the French so she could show off her brilliant comedic side. 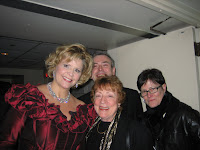 The backstage experience was especially memorable. Milda and I were among the first to arrive, somehow unintentionally ditching Sally and Wanda. While waiting our turn in line, we were amused to watch Susan being congratulated by her friends Renée Fleming and Thomas Hampson. When Renée was making her way back through the crowd, she spotted me and called my name "Sarah!" She crossed the room and gave me a big hug. She was full of apologies for not getting to talk to me at Carnegie after her own December concert. She said she was looking forward to seeing us all after Eugene Onegin in February. We also discussed how good Veuve Clicquot tastes. Silly me, who is no longer nervous in the presence of great Divas, didn't have my camera ready in order to ask her for a picture. Before Thomas left Susan's side, a friend of theirs entered the room and they broke in to a ridiculous off-key, no vibrato rendition of the Happy Birthday song. The whole backstage crowd was laughing and cheering. Somehow, I got tangled up again with Mr. David Hyde Pierce and he ended up cutting in line to talk to Susan. The nerve! Apparently they live in the same building or have friends in the same building...yes, I was eves dropping, sort of, well I couldn't help it - he was right in front of me. (Note: DHP opens on Broadway in Curtains soon.) 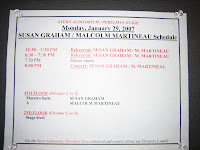 Finally, it was our turn to talk to Susie. She is so tall. So ridiculously tall. And she was still poured into that gorgeous burgundy dress - like a lovely bottle of wine. We discussed Midland's Susan Graham Day and she chuckled about the opera at the planetarium. I expressed my gratitude to her for singing A Chloris and told her that it was my favorite. She said that nobody loves it more than she does. She is absolutely delightful. After saying goodbye to her, we made our way back through the crowd and I spotted my friend Michael - yes, he knows a diva when he sees one. We chatted about Renée's upcoming Thais dates in Europe. Milda and I finally found Sally and Wanda, who had to sweet-talk the guard to get backstage (the list was botched) (Wanda has no problem sweet-talking anybody). While chatting and conveying the Renée experience, a couple of look-alikes came in to join the line...and recognized me! Well, for once, I was The Diva! Turns out they are Debra and Diana. They are silent members of The Beautiful Voice Group and also know a diva when they see one. I couldn't resist snapping a picture of my fans! Quelle nuit ravie! 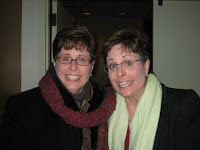 Put me down for one: