Sally, Khaleem and I spent an hour and a half in the presence of Anja Silja and Karita Mattila. Anja is a legend and Karita is quickly following in her footsteps. Both women are captivating, funny and delightful. They discussed the Metropolitan Opera production of Jenufa as well as their careers. Both singers are known for their acting ability, as well as their astonishing voices. Anja has been performing for 56 years, singing Salome over 300 times. She has lived a scandalous and absolutely fascinating life. I saw her perform Enwartung the Met Orchestra at Carnegie Hall last January. Only one word could sum up my impression of her then and even now: FIERCE. I was so astonished that I had to leave when she was finished and not stay for the orchestra's final piece. When I told her this at the end of the interview, she said, "Ya, ya, good, that is what we hope to do." I have heard Karita perform twice - wonderfully at the Volpe Gala last May and then at Carnegie last fall when she sang Strauss' Last Four Songs. Her presence is commanding - she is beautiful and her voice is divine. The two divas clearly have respect for each other - one as older mentor nearing the end of a brilliant career and one who is still learning and has a long career before her. They have many roles in common and seem to delight in each other's company. They are nothing but charming. I am definitely looking to seeing Jenufa next Tuesday. 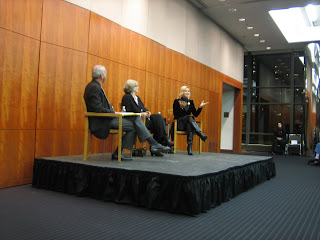 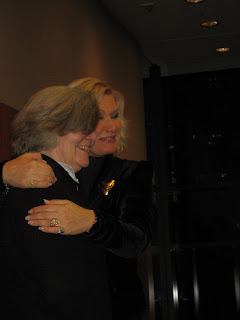 My boss Stuart once again bestowed tickets upon me. This time it was for the world premier of Esa-Pekka Solonen's Piano Concerto. Yefim Bronfman played while Solonen conducted. Feeling completely decadent, Khaleem and I took our time in making our way to our seats. We skipped the opening Ravel piece and the last Musorgsky piece. It was enough to bask in the world premier. How special it is to be in the first audience to hear a new work. The piece was bright and exciting, with an eclectic mix of percussion, piano and horns, as well as a violin solo.

On our way to the subway, we came upon the new production posters for Eugene Onegin, for which we are counting the days. 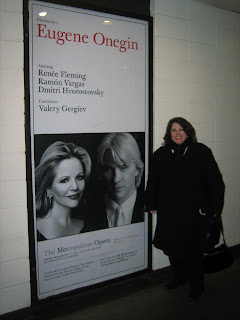 Email ThisBlogThis!Share to TwitterShare to FacebookShare to Pinterest
Labels: Divas