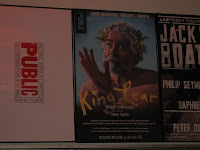 My motivation to see a show usually has to do with Sondheim. This time the deal was sweetened: Shakespeare's King Lear at the Public Theatre with Kevin Kline as Lear, Michael Cerveris as Kent and Larry Bryggman as Gloucester under the direction James Lapine with special music composed by Stephen Sondheim. Unable to resist the cast or the promise of Sondheim, Noah and I bought rush tickets for the sold out first preview. No, this is not a musical. The musis serves only as prelude, sometimes interlude and especially as dramatic emphasis, much like the Law & Order sound effects, as Noah pointed out. In modern costume and with an interesting set, it's still Shakespeare and it's still King Lear - heavy, confusing, sometimes funny, and of course, very intense. Kline seems like he is just having a conversation. It's that easy for him. Bryggman impressed me (I've know him as Dr. John since I was a child watching As the World Turns and Cerveris, although with a shaky start and briefly in a strange wig, engaged me (how could Sweeney not?), but it was Logan Marshall-Green as the traitorous son Edmund who really sold me. He gave as an intense and perfect performance as any I've seen. At over three and half hours, one cannot simply pay attention to the drama...one must stare directly across the theatre at The Master himself: Sondheim. He sat with the orchestrator Michael Starobin. He was on the aisle, slouching in his uniform of khahis and pullover sweater, fidgeting, biting his nails, taking notes, looking bored. Sigh.

*The Public Theatre holds true to its creed of serving up great theatre to the public at little or no cost (whether you're a starving student or just generally a cheap bastard). At every peformance, approximately ten tickets are set aside for this purpose. An hour before curtain, tickets are sold for $20...if you've got the time, it's worth it especially considering almost all of their productions sell out immediately in advance.
at 1:46 AM