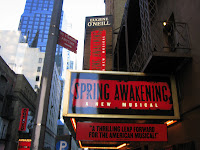 I finally, and begrudgingly, agreed to see the new musical Spring Awakening at Noah's urging. He saw it three times off-Broadway last summer and raved about it then. Although I didn't read them myself, I had heard that the reviews were among the best ever for a new musical. Instead of embracing it a new creative musical like I normally would, I decided to be prujudiced against it. I didn't think I would like the production; I thought the music was too rock style; I thought it was just for teenagers; the story didn't appeal to me; etc, etc, etc. I kept seeing the commercial for the show on television and it just turned me off. Even when Noah played me some of the music from the cast recording, I couldn't get into it. When the opportunity to see a show with Noah arose for this weekend, he left it in my hands to choose the show. Because I knew he was hoping that I would choose this one, my decision to see it was based more on his desire for me to like it as much as he does rather than my own desire. Anything for my Noah. Coincidentally over the last few weeks, Spring Awakening seemed to come up in conversation a lot among my non-Broadway friends. They see shows sporadically and usually on my recommendation...buzz has begun about the show and they are curious as to my reaction. How could I let my public down? It only took about five minutes after the lights went down to realize that all of my fears and hesitations about the production were unfounded. I was immediately drawn in by the look and style of the staging and lighting. The actors were fresh, the voices good. The music was perfect - enjoyable and appropriate, and not poppish or rock as I had feared. I got that wonderful feeling I get when something moves me - chills up and down my spine and I have an uncontrollable urge to smile. I found myself cheering and wanting more. The cast is very young - none are over 22, except for the two adults who play a number of characters. The dialogue is funny and meaningful. I thought it would be about teen angst - not one of my interests - but, it was a look at the discovery of feelings and how people handle them. In response to these feelings, decisions were made hastily and without precaution, creating havoc and tragedy. Some of of this storyline was not unpredictable, however it didn't detract from the dramatic arch or humor. I would say that if you haven't seen Spring Awakening, by all means put your indecision aside and see it. And if you think you're too old for it, believe me, you're not. I promise you'll be pleasantly surprised.

Bonus sighting: Kathleen Chalfant sitting with a group of students in box seat and leading the standing ovation at the curtain call.
at 9:54 AM

I felt the same way about this show, Sarah. My friend Jamie keeps telling me I'll enjoy it. A rock musical about teen angst? ugh.

However, I started to get interested when the typical Rent-heads began expressing dislike of this show after going upon hearing it was the new "Rent."

And now your review. Maybe I'll listen to that cast album now...sigh.

I'm another who's been dubious. Thought I was just too old for it. Now I have to see it. Thanks for your thoughtful review.