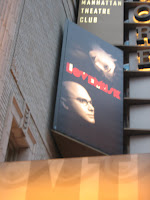 From the beginning, LoveMusik was advertised to be a sexy and provocative look at the lives of the passionate composer/writer Kurt Weill
and his on-again, off-again wife Lotte Lenya. I don't know what director Hal Prince is thinking - he's one the best in the business, yet this is just a mess. I couldn't quite figure out if it was supposed to be a biography or just a messy revue of Weill's songs. They established early on that Weill put his music before everything and everyone but it was only inferred that he wasn't exactly proud of his vaudevilian compositions and that perhaps he used that side of his creativity only for monetary gain. Unfortunately, his best songs - My Ship, Pirate Jenny, You Are - were skipped. How wonderful it would have been to hear Donna Murphy wrap her sultry voice around those tunes. Unfortunately, we were denied and tortured with only corny subpar renditions of those vaudevilian tunes. Even the beautiful September was rendered useless when it was turned into a duet between Donna (wonderful) and John Scherer who plays her promoter. Thank God, we at least got Surabaya Johnny which allowed Donna to showcase her dead-on impersonation of Lenya. I am still baffled at Michael Cerveris' performance. He seemed bored. Cerveris probably portrayed Weill as the uptight, buttoned up, insecure man that he was, but the actor's boredom shouldn't overshadow the character. Why is he even given top billing? Such a waste of talent. Such a waste of a great story. It's not the first show I haven't liked but it's the first that has me so completely disappointed.

On any given night, the uptown 10 bus is full of theatre goers. It's mostly elderly, affluent Upper West Siders who have attended theatre regularly for most of their lives, seeing almost everything along the way. With their playbills clutched to their breasts like badges of honor, the conversation on the journey uptown, even among strangers, is always about what they just saw. On this particular evening, about have the bus had just seen LoveMusik and half had just seen Corum Boy. It was clear that the Corum Boy contingency loved what they saw and recommended it highly. The LoveMusik crowd was mostly confused.
at 6:57 PM