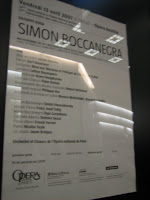 The cast was incroyable! And Dmitri Hvorostovsky as Boccanegra? Oh la la! He gets my vote for sure.

The staging was bare except for a platform with a large poster behind it that looked like a political advertisement and a number of plastic chairs. The stage was lined with a silver sequined curtain. My first thought was "where can I get some of these", but everytime somebody moved behind it the entire thing would move and shimmer, so it was really too distracting. The color orange was used through out in costuming and the few props, obviously borrowed from Orange Revolution in Ukraine.

The Bastille was the most modern opera venue that I've been in. The sound was great and the sitelines were perfect. I arrived a bit late due to my decision to walk from my hotel near Villier to the Bastille. I started early enough but was sidetracked a few times along the way.

Anyway, I digress. So, I was seated on level 6. It was so dark in the house, that other patrons pulled me along to an empty seat. It was a strange feeling but I soon became acclimated. I was able to move to my parterre seat during the intermission. Frankly, my seat in level 6 was just as good. Although I was expecting a complicated story, the lack of staging kept the story moving for me.

Dmitri sounded incredibly strong and powerful. I really liked all of the male voices, especially Franz Josef Selig as Fiesco and Franck Ferrari at Paolo Albiani. At times, Olga Guryakova's voice sounded dark and heavy, but clarity came through in her high notes and duets. I especially enjoyed the orchestra which was very intensely directed by Maestro James Conlon.
at 10:12 AM

yay! Europe! I'm so glad you have the opportunity to travel! Enjoy everything about Paris, and have a safe trip!

/and yes, it's hot as heyll here in Milan, too! Back to wearing ballet flats...stilettos is this heat? Ewwww!