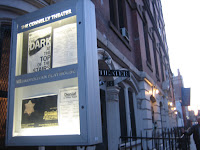 We traveled down to the Lower East Side to see The Dark at the Top of the Stairs. The best part of the evening didn't have much to do with the play. It was twilight time in a neighborhood of hip bars and restaurants and S&M shops and young people...it was good to know that we were only there for an evening. I surprised myself with the succesful subway commute via the A and F and then a stroll in the right direction, i.e. we didn't get lost in this foreign country. The play left me confused and wanting more; I was expecting more to happen at the top of those stairs, which we could see perfectly from our front row center seats. The height of the drama was achieved by the lighting design on the practically bare stage. It was about a mother struggling between her philandering husband, her spoiled children and a desire to have more, both in her relationship and to keep up with the rich neighbors. I was impressed by Donna Lynn Champlin, but Michele Pawk stole the show with her bawdy presence. Her line that hit the hardest: "Why do you think I talk so much? To know I'm alive." Some of the plot points were too obvious but it just never delivered. There were hints at abuse, but it never became obvious what the real problem was. Still, now I am really curious to see what they made of the 1960 movie which must have completely different screenplay. From the stills I've seen, it sounds like it is more about the husband than the wife. Angela Lansbury plays Mavis, a character only talked about in the play. She commented that she was most proud of her work with Robert Preston in this picture. Curious.

We were hoping to see Michele's dreamy husband John Dossettin the audience, but we did see Jamie DeRoy and the incomparable Mary Testa.
at 4:39 PM

Jamie de Roy is now a hair hero of mine.

Aah, The Dark at the Top of the Stairs; shades of Angela Lansbury in the wings......