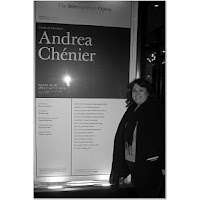 Andrea Chénier is one of the most enjoyable operas I've seen yet, and it included some of the best performances I've seen. I have seen Violetta Urmana in several roles now - as Ariadne, as Giocanda and now as Maddalena. I am so impressed with her presence and her voice - her voice is commanding yet tender and beautiful. I saw Ben Heppner's Otello several seasons ago and loved him. I had heard lately that his voice has been hit or miss, but he sang perfectly this night. Again, like Violetta, the voice is big yet so beautiful. He was the first "big" tenor I saw in person and I have not been disappointed. The supporting cast was also impressive. Everybody delivered both vocally and theatrically. The story itself, set during the French Revolution, was wonderful - love, war, honor - it had a trueness to it. I have liked "old school" operas, but rarely are they delivered with such outstanding acting, usually it's more of the "stand and deliver" modus operandi. The Met Opera site even suggests that if you like Chénier, you might also like Tosca, La Giocanda and Don Carlo. well, I did see them and I did like them, but while entertaining, they are not "real" to me. I am rating Andrea Chénier in my top ten operas that I have seen thus far and I'm sure it will stay there for all time.

Bonus: I didn't purchase a ticket in advance. When I went to the box office prior to the performance to buy a $15 family circle seat, I was offered a $20 rush ticket by the box office. Not bad for Row X - perfect view too.