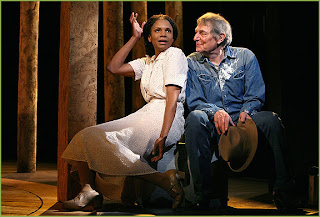 Tonight it's on to 110 in the Shade to see Tony nominees Audra McDonald and John Cullum. These are the tickets that I bought during intermission when I saw the show a couple of weeks ago...you know it's that good when you don't even wait to see how it ends.

Friday A.M. Update: Wow! I am still singing "You're Not Fooling Me" in my head. I simply cannot wait for this cast albumto be released. Audra just makes it seem so simple. I know she's working hard, but her performance is ridiculous. She absolutely transcends the material. At the stage door, I congratulated John Cullum on his Tony nomination. He said he was honored. He quipped that the difference between him (now 5 nominations/2 wins) and Audra (now 5 nominations/4 wins) is that she wins all of hers. A prediction, Mr. Cullum?
at 8:52 AM

I bet your mom loved it!