My Favorite Kind of Week 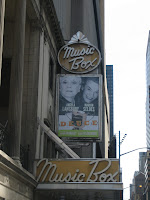 Turns out that my SAD was short lived. Sure, the cure was just as expensive as say, therapy or chemicals...but infinitely more entertaining. It all began with a complimentary visit to Deuce with Noah on Independence Day. He very much enjoyed it, especially the performance by the ladies Marian and Angela. I daresay he was a bit stagestruck at the stagedoor and as evidenced in an earlier post he had quite a meeting with Marian. I hit Deuce again on Friday night - my birthday present to myself, a ticket that I purchased many moons ago thanks to a benevolent American Express card holder. The Friday night crowd was unusually quiet but I was glad to be there in my B1 seat. There aren't too many more chances to see Angela Lansbury and Marian Seldes do their thing and I'm taking full opportunity of the chance I've been given now. 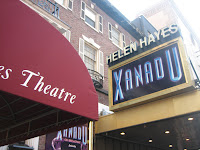 We then made a stop at Xanadu, thanks to our friend Litwit. Oh you know I love theatre and I love being entertained, but honeys, I can't tell you the last time I was THIS ENTERTAINED. From the opening to closing number, it is a riot that had me jumping, clapping, dancing, laughing out loud and singing in the my seat. I think everybody in the Helen Hayes was doing the same! It was nostalgic all the way and took me back to Jamie's blue and purple bedroom and time spent listening to Olivia Newton John. Kerry Butler and Cheyenne Jackson were heart throbby, comedic and sang the hell out of those early 80 pop hits, but for me it was Mary Testa and Jackie Hoffman who absolutely stole the show. I left singing and couldn't wait to go back. I had that chance again when we scored more comps. Twice in one week? Yes! And it was worth it. I had the same exact experience and have vowed to go again and again. 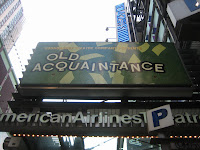 The week ended on a high note at Old Acquaintance. Margaret Colin (my favorite Margo from days gone by on As the World Turns) was wonderful and sweet, while Harriet Harris had the audience in stitches with her patrician voice and her physical comedy. It was Harriet as the fabulous Irene Dunne, not so much in looks but definitely in delivery (I saw Harriet's Vera steal the Kennedy Center Mame last summer - imagine Irene Dunne as Vera?) while Margaret was more like Myrna Loy, tall and beautiful with a killer comedic timing and wry delivery. With its witty Dorothy Parker-esqe dialogue, the short three act play featured a beautiful set, which was deservedly applauded, and a fabulous 1940s pre-war style. It had me loving the poignancy of the characters' friendship and laughing out loud at their ridiculous situation.

It was a pretty damn good week and now on to filling the rest of this hot steamy July in New York City with an even hotter Gypsy at City Center.
at 8:07 AM

Wow, Sarah, what a great week you have planned! I've been reading through your archives and I can't believe everything you've seen and done. I've never been to an opera, but you're so enthusiastic about it, you make me want to go to the Met sometime on one of my visits to New York.

Oh Esther, that was last week! I was just slow to blog. I'm so glad I'm inspiring you! When you're not getting yourself to Broadway, get yourself to the Met!!! You won't regret it.

I finally made the blog