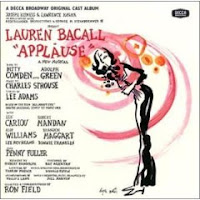 Encores! at City Center has just announced that Applause will be part of its season in February, 2008 starring Christine Ebersole as the venerable Margo Channing. Applause, based on the iconic film All About Eve, featured a book by Comden & Green, music by Charles Strauss and lyrics by Lee Adams. It opened on March 30, 1970 at the Palace Theatre and ran for 896 performances. Lauren Bacall, making her musical theatre debut as Margo Channing, won a Tony award for Best Actress in a Musical, while the show won Best Musical, Best Direction and Best Choreography. Len Cariou also made his musical theatre debut and garnered a Theatre World Award as well as a Tony nomination. The original cast recording is one of my new acquisitions and I am completely in love with it. I'm not a huge fan of Lauren Bacall, but here, she is the perfect diva, brash and gutsy with her pack a day voice. That voice of hers is rough and smokey and she almost talk sings. The score is a mix of big time Broadway and funky 70s, a show within a show about show people. I can't wait to see a staged production of the show. Christine Ebersole's beautiful soprano will bring something completely different to the songs and I know she'll act the hell out of it. No doubt we'll be in for quite a ride: "Fasten your seatbelts, it's going to be a bumpy night!"

Click here to listen to Lauren's But Alive from Applause.
at 10:12 AM

I have never seen Applause but remember watching Lauren Bacall sing the title tune at the Tonys way back before you were probably even alive, Sarah. I would love to see this performance.