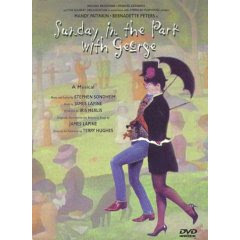 The 2007 fall season on Broadway is just bleak. We won't even have the revival of Sondheim's Sunday in the Park with George until the end of January. Alas, I'm even having trouble summoning excitement for that, and it's Sondheim for Pete's sake. I suppose it's because the original Dot in Sunday was just so perfect. Not that I saw her live, but I know she was perfect thanks to the magic of the DVD. Noah is a bit disgusted with me for being closed minded about the upcoming revival - how could I be cold about it when I haven't seen a live performance and he points out that the new Dot did win an Olivier for the London production. I will remember that Sondheim is a prophet of the musical theatre and in the end, and as the date approaches, there is no doubt I will be excited. In the meantime, I'll have the Met Opera (Lucia, Butterfly, Norma, Traviata, Iphigenie, War & Peace), Avery Fisher (Barbara Cook!) and Carnegie Hall (Kiri!, Renée!) concerts to keep me fairly busy.

It's such a gorgeous show; I have no doubt that you'll be excited as it approaches.

Audra was pretty glorious as Dot at Ravinia. Even though Cerveris was a hot mess.