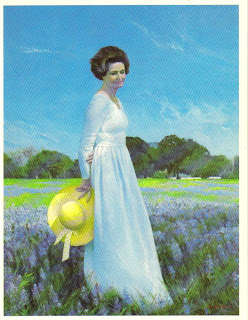 Lady Bird Johnson passed away today. I have one of those six degrees connections to her. My Aunt Beth nee Elizabeth Woolls taught school at the Wellhausen School in Cotulla, Texas in 1928, where Lyndon Baines Johnson was the principal. She had a car - he didn't - and would sometimes drive him around the tiny town. She told me that they were dating, but I'm not sure I really believe that. Aunt Beth (my namesake) could tell a tall tale on occasion (remind you of anybody?). LBJ didn't stay there long, leaving to pursue a political career. If he hadn't married Lady Bird (and her money) whom he met at the University of Texas, it probably wouldn't have been quite so easy for him to rise through the political ranks. In the 1960s, my grandmother Frances, Aunt Beth's younger sister, was a secretary in his Austin office when he was in the Senate and then after he became Vice President. My mother and her sister were on their way to Austin to a dinner in Austin on November 22, 1963, when they heard that LBJ was now their President. My grandmother was offered the opportunity to move to Washington to work for the President at the White House, but she was already ailing from cancer and passed away in 1964. Years later, when I went to the University and then lived in Austin, I spent many hours at the LBJ Presidental Library. Around 1990, I had the opportunity to meet Lady Bird when I was working a party at the home of Ben Barnes. I was manning the phones pre-party and answered a call from "security for Mrs. Johnson". It dawned on me that I was speaking to a secret service officer. He wanted the directions to the Barnes home. I guess I steered him right, because later that evening I had the opportunity to meet her. I was completely star struck. I met her again at a rally in Austin for Hillary Clinton and women in Texas politics. She was completely gracious, soft spoken, lovely but so strong - a true Texas heroine. 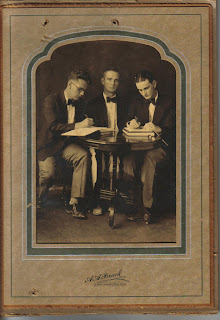 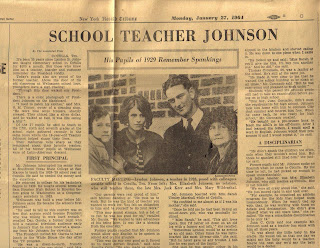 I love that story: two sassy Texas broads. Amen to both of you.

I so enjoy when you share your family stories and memories.