This Gypsy opened on November 16,1989 and ran for 486 performances at the St. James Theatre first and then the Marquis. Tyne Daly won her Tony award for Mama Rose.

Woman of the Year opened on March 29, 1981 and ran for 770 performances at the Palace Theatre.

Lauren Bacall won her second Tony for this role.

Patti LuPone performed this Matters of the Heart concert on Sunday and Monday nights from October 15, 2000 to December 17, 2000 at the Vivien Beaumont. Contact was running concurrently in that theatre.

Sondheim's Saturday Night is a rarely produced musical. This cast included a couple of recogniable names: Natascia A. Diaz and Andrea Burns.

This Sweeney Todd was affectionaly (or not) known as Teeney Todd, as it was a miniscule production compared to the original. This first revival of the Sondheim masterpiece only lasted for 188 performances at the Circle in the Square Theatre.

This revival of Into the Woods opened at the Broadhurst on April 30, 2002 and ran for 279 performances. It won the 2002 Tony for best revival. I'm embarrased to admit that I didn't see it.

I picked up this Playbill magazine article about Frank Langella for Sally. I expect it will make her happy.

This is from Opening Night of Pacific Overtures from January 11, 1976. I saw the beautiful revival in 2005 at Studio 54.

Passion opened on May 9, 1994 and ran for 280 performances at the Plymouth (nka Schoenfeld). It won the 1994 Tony Awards for Best Musical, Best Book of a Musical for James Lapine, Best Original Score for Stephen Sondheim and Best Actress in a Musical for Donna Murphy.

Rupert Holmes' The Mystery of Edwin Drood starred Betty Buckley, Cleo Lane, George Rose, Patti Cohenour and Howard McGillin. Donna Murphy and Judy Kuhn were in the cast as well. It opened on December 2, 1985 at the Imperial and ran for 608 performances.

This revival of Follies was another revival flop for Sondheim. It opened on March 8, 2001 and only ran for 117 performances.

The Goodbye Girl was a flop. Opening on February 13, 1993, it ran for only 188 performances. Bernadette left Into the Woods to star in this with Martin Short. There were nominations all around but with lyrics like, "Paula, on my knees, you're so much talla", it just didn't have what it takes. Still, it ran long enough to have two very different cover disigns.

Oh Dad, Poor Dad, Mamma's Hung You in the Closet and I'm Feelin' So Sad has to be the best title ever for a play so I just had to have this one. It only ran for 47 performances but it starred Hermione Gingold and Sam Waterston made his Broadway debut!

This revival of Annie Get Your Gun, starring Bernadette Peters, ran from March 4, 1999 to September 1, 2001, for a total of 1,045 performances. Bernadette won the 1999 Tony for Best Actress in a Musical and the show won the Best Revival of a Musical. When Sondheim asked her how she could play that character for almost two years, she replied, "Well, she is a woman." I caught this one on video at the New York Library of Performing Arts. Bernadette was darling at Annie Oakley.

Contact was still running in 2001 when it was Barbara Cook's turn to take the stage of the Vivian Beaumont on Sunday and Monday nights from December 30, 2001 to August 25, 2002.

This Roundabout Production of Company opened on October 5, 1995

and only ran for 60 performances. It had a hell of a cast - Danny Burstein, Kate Burton, Diana Canova, Veanne Cox, Charlotte d’Amboise, Jonathan Dokuchitz, Boyd Gaines, John Hillner, Jane Krakowski, LaChanze, Timonty Landfield, Debra Monk, Patricia Ben Peterson and Robert Westenberg. I asked Debra Monk (Joanne) what instrument she would have played had she been in the recent revival and she responded, "I play the drums!"

A few other items I grabbed were 2 handfulls of buttons from Grey Gardens
and a Grey Gardens program signed by Kelsey Fowler who was working that table for all it was worth and she talked me into buying them, a silver necklace from Tyne Daly's table (trade for the Gypsy autograph), and playbills of 1943 One Touch of Venus starring Mary Martin, 1966 The Appletree starring Barbara Harris and Alan Alda and 1980 Camelot starring Richard Burton and Christine Ebersole and 1978 Ballroom starring Dorothy Loudon and signed by her!
for my little love.

You know I wanted these (among other things), but I would have had to spend my rent money. Occassionally my "sense" kicks in. 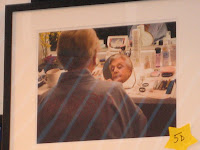 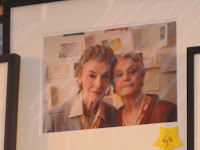 Among others, I spotted Jeff Bowen browsing the stacks and stacks of treasure at the same table as me(perhaps he was looking for further inspiration for another Monkeys and Playbills tune), Veanne Cox browsing a table of wigs, and my friend Todd Buonopane who is playing Ralph Malph at Paper Mill's Happy Days. 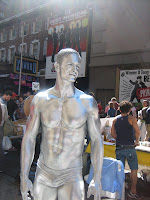 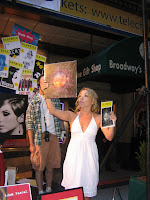 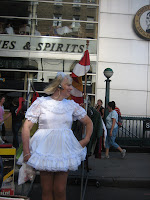 Nice haul -- you did well. Have fun tonight!

I missed you there, I knew I should have called. i took photos and video of Tyne Daly's table with Tyne there.

What a treasure trove. Looks like you really made out well. I'm jealous.

And I loved the (relatively) recent revival of Into The Woods. Too bad you weren't able to see it.

I do have a coughbootlegcough of the revival of ITW if you want to see it. I wasn't that enchanted by it, honestly. But it's an interesting artifact to have. All you have to do is ask.

Also: what an interesting cover to that Daly Gypsy playbill. The dress is very odd - since she doesn't wear it in the show.

In real life, Tyne was married and is a mother to 3 daughters, but she isn't that, um, feminine...I think the idea of the playbill cover picture was to glam her up a bit.