The Lullaby of Jerry Orbach Way 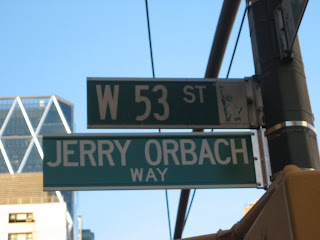 Part of 53rd Street became Jerry Orbach Way this week. Jerry was the first celebrity I saw in New York in June, 2002, at this very spot. I wasn't quite so composed back then when it came to celebrity sightings, but I somehow managed to give him a smile as big as my home state. He smiled back and nodded at me. I loved him dearly since I first lay eyes on him as reoccurring character private eye Harry McGraw on Murder, She Wrote. That reoccurring character gig earned him the short-lived, but very entertaining The Law and Harry McGraw. You know that lead to his appearance in 274 episodes of Law & Order. In the meantime, he lent his voice to dashing Lumiere in Beauty and the Beast.
Of course, before tv and movies, he was a leading man of theatre, starring in three off-Broadway shows and nine Broadway shows. He originated the roles in Promises, Promises, which earned him the 1969 Tony for Best Actor in a Musical, Chicago and 42nd Street.

Love it -- such an elegant, low-key man.