I Buckled for Buckley 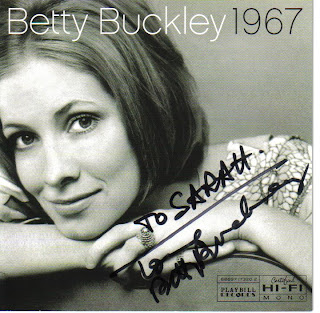 I buckled and bought a ticket to see Betty Buckley at Town Hall tonight. She's celebrating 40 years of repertoire. That's something I can't miss.

And I'm glad I didn't miss it. The first time I saw her was at the Children and Art Benefit Concert for Sondheim's Young Playwrights. But she didn't grab me and make me listen, really listen, until I saw her earlier this year at the Broadway for Medicine benefit concert. I knew then that I that I had to see her whenever I could in New York so Kari and I caught her cabaret at Feinstein's and then twice at the Bluenote. At her cabaret, it was like sitting in a living room with her, while she wooed us with her songs, still belting and fierce but intimate as she looks right into your eyes and lets you know that she means the lyrics she singing. On the concert stage, it's that same feeling only magnified. I was sitting in the loge and couldn't make eye contact, but I still felt like she was singing right to me. She expanded her cabaret act by throwing in more theatre songs, especially With One Look and her signature Memory. She sang two acts and changed clothes. She started with a sparkly diva look all in black - skirt, spike high heeled boots, and a sparkly top. For the second act, she wore bronze high heels, black slacks with a sort of silk kimono blouse. She looked really stylish, not always her forte. Betty does things with songs that you didn't know could be done. The original medley is there, but the arrangements are so jazzy and thoughtful. Her voice delivers each song like it's the only song that will ever be sung. She extends her arm out in front of her so the microphone is not at her mouth when she goes for the belt and the effect is thrilling. The house was almost full, with most people there for Betty, with a few there because they had tickets for the entire annual Cabaret Festival at Town Hall (like the couple in front of me who seemed neither irritated nor pleased with Betty - how can you be indifferent to Betty? Really!).

Act I
Angel from Montgomery
Stardust (sultry!)
On the 4th of July (one of my favorite songs that Betty does live)
Come On, Come On (her favorite song of all time)
One Boy (this is on the 1967 album - 40 years later it's just a tad lower)
C'est Magnifique (ditto!)
They Can't Take That Away From Me
Fire and Rain
It Might As Well Be Spring
With One Look (she said, "I'm going to close the first half with this one from Sunset Boulevard" - applause - "Oh it's so good to be in New York! There are some towns in the midwest where I have to give the whole synopsis. This is Norma Desmond's first act aria. Yes, we call it an aria. Ever since Andrew Lloyd Webber became a Lord, we call all his songs arias.")

Act II
Some Enchanted Evening
It's a Long Way Back to the Man (?)
Medley that ended with the River is Wide
Come Rain or Come Shine
? from The Fantasicks (she said she can sing all the roles and someday she wants to do the entire show herself)
On the Street Where You Live
I Could Have Danced All Night
Dreamin'
Memory (!!!)
Get Here
(?) Tom Waits song 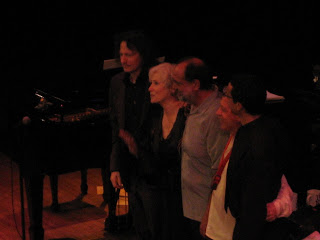 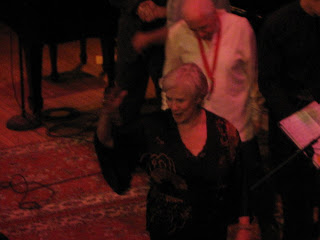 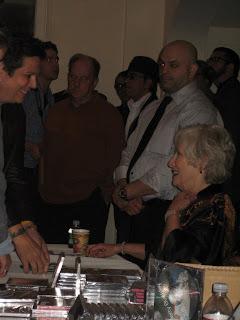 I just got her 67 CD in the mail on Saturday, and listened to it in the car for the first time on my way to work this morning. I LOVE IT.

Glad you had a great night. And glad that Buckley has decided to let someone else dress her. That autograph is awesome.

The 1967 album is absolutely delightful. It's hard to believe that Betty was nineteen years old, tackling those standards with suprisingly mature phrasing. The timbre of the voice is higher, but it's still that steely soprano with the unique vibrato that is her sound. I can't stop listening to it - especially C'est Magnifique.

I love my Eight is Enough mom.