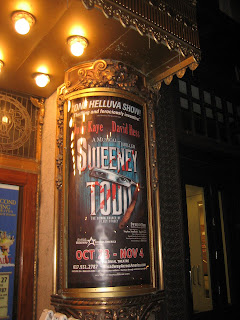 The lure of seeing Sweeney Todd on Tour in Boston was too strong for me to resist, especially since Broadway revival cast members Lauren Molina, Benjamin Magnuson, Diana DiMarzio, and John Arbo were on board. Luckily, I wrangled a boondoggle to the mothership of my firm, on their dime no less. It was no secret that I was more than excited about seeing Sweeney again. It really is everything that musical theatre should be in my opinion. The story of the barber, fraught with humor, suspense, love, and horror, is told in an operetta style which is really my favorite.

Lauren as Johanna, Benjamin as Anthony, Diana as The Beggar Woman, and John as Fogg, are stronger than ever in their roles. They lost none of their intensity in characterization. Benjamin was in especially good voice and I would vote for him for Most Improved Overall. I was so happy to see all of them again. It was like seeing old friends again. Have supporting players ever been as invested as these actors are? They are astounding and completely in character in each moment.

My all time favorite character is Mrs. Lovett. I love her (although it remains to be seen if I will love Helena Bonham Carter's Lovett) because she is funny, sweet and independent. However, she is also a lonely woman. The twist is that she is not above manipulation to get what she wants when she sees her chance at love, no matter the cost. Judy Kaye is Lovett in this tour production. I caught her in the revival when she substituted for Patti LuPone in June 2006. My impression then was thus: "I found her performance to be closer to what I saw Angela's [Lansbury] on the dvd of [Sweeney Todd], but it was her own as well. She reminded me of Patricia Routledge's Hyacinth, a tad pretentious on purpose, but always meaning well. Her Mrs. Lovett was dotty without being over the top with just the right amount of fierceness. She was precise in her diction and her high soprano was gorgeous in "Wait". She showed a more caring side of Mrs. Lovett, not quite as aloof. She is a consumate comedienne and had perfect timing tonight." My impression has not changed. The difference was, I'm certain, that some of the tunes were taken down an octave for her, especially "Wait". It was interesting to hear her in an alto, almost contralto, voice at times - so full and so warm. There were two moments when it was completely clear that this was her Lovett and not just the director's vision, LuPone's Lovett, or even Lansbury's: first during "Little Priest", when Sweeney took her into his arms in a dance, the look on her face was of complete surprise and delight. When Patti LuPone and Michael Cerveris did this scene on Broadway, it was a completely down and dirty sexual scene, but this was sweet and playful. The lonely, defeated look on her face melted away into happiness. The other moment came during the second act "Johanna". Sweeney is continuing the killings and Lovett is going about the drudgery of the harvest and clean up as she changes the buckets of blood. She was downstage center and just before she repeated her tasks yet again, she heaved her shoulders, almost in defeat. It told me that this Lovett was only doing this for the love of this man. I didn't see that with Patti's Lovett, who seemed to be as maniacally into the killings as Sweeney, albeit for a different reason. Additionally, Judy's diction is perfect so there were laughs from the audience where Patti didn't get them. I didn't specifically miss Patti's Lovett because I knew going in that I was going to get Judy and a different Lovett. It was thrilling to see her performance in a completely different way than I was thrilled by Patti's.

On to Sweeney. David Hess was a standby in the Broadway revival. Somebody will have to tell me if he actually ever went on, because I only saw it twice without the regular leads - once Donna Lynn Champlin was on vacation and the other was the aforementioned substitution by Judy for Patti. David is tall and ruggedly handsome in a distinguished sort of way. While Cerveris was frightening and maniacal as Sweeney, Hess looks world weary. Cerveris wore the obsession for revenge on his sleeve, but Hess' is buried and never quite comes to the surface competely. He is not as fierce in the role. But, his deep voice, both in speaking and singing, is deep and gorgeous. It is closer to the original Sweeney Len Cariou and his replacement George Hearn, where I always felt like Michael Cerveris might be struggling at the lower speaking voice almost to the point that it seemed unnatural. Hess brings his natural voice to the role and if not for this, his Sweeney would have disappointed me.

Edmund Bagnell is Toby on this tour. He is unbelievably fresh and young. I have a feeling that he will grow in the role, but he's not there yet. His voice is beautiful and his violin playing even more so. He didn't bring most of Manoel Felciano's brilliant characterizations, I believe partly due to direction decisions and partly due to incapability and lack of experience. In the Broadway revival, I always had the feeling that this was all Toby's story and we were seeing everything through his eyes. I didn't get this from Edmund, but I'm not giving up on his. He is a sweet and more adorable Toby, just as Lovett says, "What a sweet considerate child it is." When Lovett says he is not right in the head, I believed it of this Toby because he seemed like a retarded child, but when it was said of Mano's Toby, I felt like it was so because he was mentally disturbed.

The three remaining tour cast members are Benjamin Eakley (another Sweeney standby I never saw) as The Beadle, Katrina Yaukey as Pirelli and Keith Buterbaugh as Judge Turpin. Benjamin Eakley is tall and male model gorgeous. His costume was slightly changed - a white windsor-knotted tie instead of a bow tie, changing his look into that of a gangster. He was sufficient in the role, bringing virtuoustic pianto skills (he has been a 5-time piano soloist at Weill Recital Hall!) and instead of trumpet, lending to the ensemble clarinet and soprano saxophone. Katrina Yaukey was also sufficient, although I missed the characterizations that Donna Lynne Champlin brought to Pirelli. On Broadway, she was Toby's handler and the onstage music director of the ensemble. The only true disappointment of this tour production for me was from Keith Buterbaugh. He brought none of the dictatorial or demonic qualities exhibited by Marc Jacoby in the revival or even Edmund Lyndeck in the original. These actors made me hate this man, abusive and controlling with his power. Buterbaugh was just made think of a pitiable creepy older man who couldn't get a woman so he would victimize a helpless one. He had none of the intensity of Jacoby, neither in voice nor in acting ability.

The tour production is staged almost specifically as it was in the Broadway revival. I saw few differences in costume, other than mentioned above (except Judy did not wear the impossibly high heels that Patti tottered about on and her wig this time was MUCH better - not that Golden Girls look from last summer). Also other than mentioned above, the instrumentation was basically the same. Diana DiMarzio played piano this time during "Nothing's Going to Harm You". Hess took up the trumpet a time or two instead of Cerveris' guitar. The main difference of seeing it in a different house was the house itself. It was quite a thrill to be in the Colonial Theatre, that venerable house where so many Broadway shows tried out, among them Oklahoma, Anything Goes, Porgy and Bess, Carousel, Annie Get Your Gun, Follies, and A Little Night Music just to name a few. It is huge and grand. The Eugene O'Neill, where I sat for the revival so many times, has just over 1100 seats. The Colonial is almost three times that size. More importantly, the sound was exquisite! Every note played and sang was crystal clarity. It was so different hearing it this way instead of the muffled closeness at the Eugene O'Neill. I thought at first that the miniscule set would be swallowed up in the size of the stage and house, but even though compacted, it seemed to open up and make the story larger. It lent perfection. Unfortunately that large house wasn't nearly as full as it should be as some other event in town caused people to neglect their previously purchased Sweeney tickets. This saddened me as those seats at the front of the orchestra were already sold out when I bought my ticket, but I'm not completely upset because my first row mezzanine seat was pretty spectacular. So despite the limited disappointment in certain cast members, over all I am quite pleased with the production. I was tempted to stay in Boston on Friday night to see it again but exhaustion won out. I haven't booked a flight to another tour stop, but don't doubt that I'm not thinking about it.

By the way, I snagged Lauren Molina's first cd Doo - Be - Doo, which is nothing short of delightful with its sweet and thoughtful lyrics. It's all original by Lauren and is full of fun instrumentation and melodies. Snag your own copy. You won't regret it.
at 8:33 AM

Love love LOVE the review! Thanks Sarah! I'll have to bring up my Lauren Molina CD, Thanks for the reminder....

I hope you are implying CHICAGO! You always have a place to stay, you know.

Thanks for the heads up about Lauren's cd - I just went and ordered myself a copy.

I am looking forward to seeing it again when it comes to Chicago!