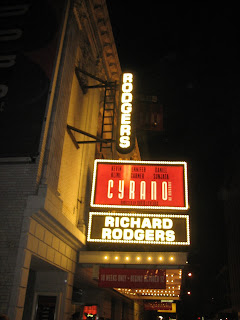 Is there really a more perfect play of words than Cyrano de Bergerac? This period piece has everything - humor, farce, sword fighting, dashing heroes and above all, romance. Oh, it is romantic! And even better, it is FUNNY! Let's get it over with. Jennifer Garner, star of television and movies who can light up the world with that dimpled smile of hers, is making her Broadway debut. Wait! She's NOT making her Broadway debut! (Well, she sort of is, because she was an understudy in that play that only lasted for 55 performances, including previews and that was a hell of a cast! One never knows. Well, it was 1995 before its star was really a STAR.) So, Jennifer. She was true to the role of Roxanne, an airhead romantic looking for hearts and flowers in words and in looks from her man. Jennifer delivered her lines like a pro and her stage movement seemed easy and natural. She was gorgeous in her period piece satin dresses. There were members of the audience obviously there to see her, and I doubt they were disappointed. How could they be when I was so completely surprised and delighted with her performance? My friend Mary Ann and her son William, a diehard young fan of Jennifer's, are waiting to see this until November and I had warned her, "Whaddyakiddin' me?! Don't see this in previews! She won't be ready!!" I take it back. This was only her eighth preview and she was more than ready, as was the entire cast. BUT I was there for my Kevin Kline, not only because I love him in the movies but because he is a master of the stage! How does he do it? He is just there on the stage and I forget that he is acting. I was breathless, on the edge of my seat, completely engrossed by his presence, his voice, full of sarcasm and wit but also tenderness, hanging on to every one of his elegant words. Yet he was not breathless as his Cyrano tirelessly and effortlessly jumped and danced, galantly fought with his sword so nimbly all the while reciting poetry off the cuff as if these were really his words. He did get mthe most applause from the full house, as he deserved. My heart is still pounding from the thrill of seeing his performance. Joined with this beautiful play of words were the sensitve lighting, gorgeous use of fabric and thoughtful staging. The three hours flew by for a completely fulfilling and entertaining evening.

God of Comps*, again I bow down to you!


*I warn you. This is NOT who you think it is. How do I do it? I attribute it mostly to my clean living and my ever sunny disposition, but there is the little thing of it never hurts to have friends in certain places. I'd give you directions to that certain place, but then I'd have to kill you, so you may as well not even try.
at 4:31 PM

Be sure to post a review of Cyrano. I'm seeing it in December,

Mandy, you're gonna LOVE it!

Roxane: And when that moment comes to you and me—
What words will you? ...

Cyrano: All those, all those, all those
That blossom in my heart, I'll fling to you—
Armfuls of loose bloom! Love, I love beyond
Breath, beyond reason, beyond love's own power
Of loving! Your name is like a golden bell
Hung in my heart; and when I think of you,
I tremble, and the bell swings and rings—
"Roxane!" ...
"Roxane!" ... along my veins, "Roxane!" ...
I know
All small forgotten things that once meant You—
I remember last year, the First of May,
A little before noon, you had your hair
Drawn low, that one time only. Is that strange?
You know, after looking at the sun,
One sees red suns everywhere—so, for hours
After the flood of sunshine that you are,
My eyes are blinded by your burning hair!

Sarah, Now I am waiting with bated breath....until November 16th! It sounds fantastic!

"now that was a GOOD show"

(Mary Testa commenting on Bonanza in SEE WHAT I WANNA SEE)