The Vultures at FIAF Fall Festival 2007 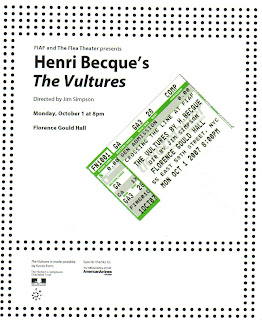 Last night I saw a free staged reading of The Vultures by Henri Becque (1837–1899). What a delightful play! Centered around the unexpected death of a beloved patriarch, it is the story of a woman and her three daughters and the supposedly trustworthy professionals who descend upon them when the father's estate must be settled. It seems maudlin, but it was so sensible, well written and filled with humor that it was impossible to feel sad. It was so much fun seeing Kathleen Turner and Bebe Neuwirth up close from my first row seat, and even more fun hearing their famous voices with French accents. During the intermission, Sigourney Weaver came up and stood next to me while she visited with Jim Simpson. Jim is the founder and artistic director of The Flea Theater. Sigourney has acted in a number of productions there, including Mrs. Farnsworth, which Vicki and I saw in 2004. It was a profound theatre experience for me - Sigourney, in character, climbed the steps and pointed right at me and said, "Write your story." Sigourney is one of my favorite actresses, especially in Tadpole, which also starred Bebe Neuwirth! Voila! 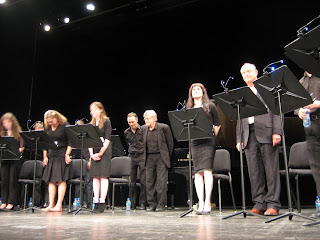 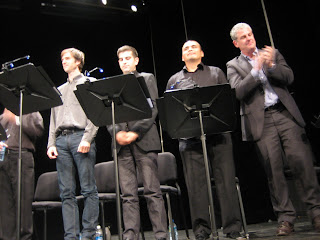 By the way, that's James Waterston in the jeans. He's the spitting image of his daddy in so many ways. Watch for him to take over.
at 8:24 AM

Would loved to have been there. I love Bebe Neuwirth. My front-row experience with her was at the Zipper Theatre a few years back. What an entertainer!

And to think you were up close and personal with Sigourney, too. Love that!

I believe Sigourney Weaver is also married to Jim Simpson, which explains a lot ;-) Glad you enjoyed!

Yep, that explains a lot.