And Johnny talks about Sondheim and some other Sweeneys 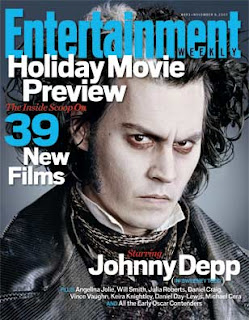 This week's Entertainment Weekly (#963 November 9, 2007) is all about giving us a preview of Sweeney Todd. Don't you think that it's odd that this is being touted as a "holiday movie"? Not exactly the feel good winter tale. Oh well, I'll take it any time I can get it. On the website there's an extra Q&A with Johnny Depp in which he sounds off on Sondheim:

EW: Musical lovers and Stephen Sondheim fanatics know Sweeney Todd really well. What about the general public?
JD: Somebody sent me this thing from online. Somebody said, after they saw the trailer, "I don't understand why in the middle of that trailer Depp broke into a song. Like, Whoa — What is he doing?"

EW: Singers say Sondheim's melodies can be incredibly tough. Why?
JD: It's real obtuse stuff. When you start to take those pieces apart, melody line by melody line, it's a lot of half-steps, which is not real easy to do. Kind of go G to A-flat to A to B-flat. It's super, ultra complicated, these notes that shouldn't work together at times. But he made them so.

EW: Did Sondheim have any good advice for you?
JD: He said to me early on, it was much more about the acting work than the singing. He felt the singing was secondary to hitting the notes emotionally. I didn't believe him. [Laughs] I think he was probably saying that to make me feel better about what I was about to attempt.

EW: And what did that feel like?
JD: Frightening. Really frightening! When Tim asked if I'd be into it, he said, ''Do you think you can sing?'' And I said, ''Honestly, I don't know.'' I'm not tone deaf, so I knew I could stay in key to some degree. But I didn't know if I could sustain a note, or belt one out.

EW: You were in a number of rock and roll bands before you became an actor. Didn't you do any singing in those?
JD: Virtually none. Just backup.

EW: And yet Sondheim approved you without an audition.
JD: Sondheim, bless him, had barely heard me talk. So when he said, "He'll be fine," it was a real shock.

EW: What did Tim Burton say to you after he finally heard your singing voice?
JD: He couldn't have been sweeter about it. He was really supportive, and said he really liked it. It was the reaction I was praying for.


And about his Sweeney predecessors:

EW: Were you conscious of what previous actors had done as Sweeney?
JD: Tim and I early on said, "We've got one shot. I don't think we need to go where Len Cariou went or Michael Cerveris went. We should go somewhere else. This could be the punk-rock Sweeney, you know. The alternative Sweeney."


AND STILL, THERE IS JUST VERY LITTLE ABOUT HELENA BONHAM CARTER'S LOVETT. Hello out there, she's the leading lady! Lovett does have a story too, you know. But some of her fans at Helena World did manage to grab some screen shots - a few gorgeous photos of what's to be expected. 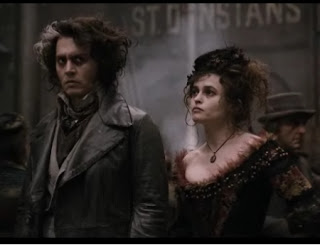 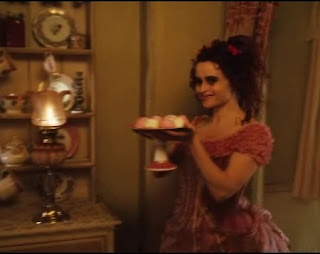 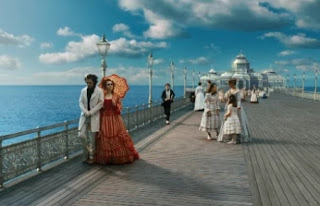 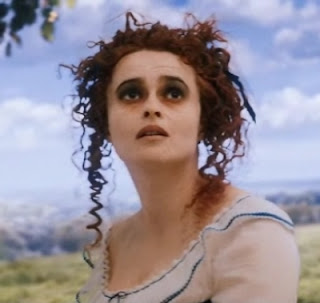 I hope the premiere is in NYC, and the writers strike is over and I get to shoot him at Letterman. Oh a boy can dream!!