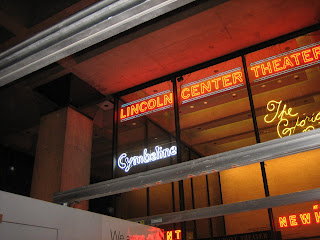 Shakespeare's Cymbeline is...well, it's Shakespeare. It started slowly and dragged along and I thought to myself how in the world was I going to make it through the three hour show stuffed into a row with no leg room and a lady with a cough next to me? I stuck it out and was rewarded. The lighting and costumes made this production. There is virtually no set, yet it works. The costumes are gorgeous. The cast was wonderful. I loved seeing Phylicia Rashad as the evil queen. She's always regal regardless of her setting. She delivered her lines like a sassy black lady and I couldn't help but think of her brilliant Aunt Esther from Gem of the Ocean. Playing her spoiled, idiot son was Adam Dannheiser, who threatened to steal the show. Despite his evil ways, the audience obviously loved him. Also pleasing the audience with his acting AND his looks (one scene he is wearing only a towel - oh my) as the Roman who deceives and tricks was Jonathan Cake. Legendary John Cullum is King Cymbeline. He pulls it off, but the story is not about him, but rather his daughter Imogen played by the incredibly fluid Martha Plimpton, her husband Posthumous played by Michael Cerveris. Outstanding in the rest of the cast are the outcasts played by Paul O'Brien, David Furr and Gergeory Wooddell. I won't tell you who these are playing are because it will spoil the plot for you. And because you should see it, you deserve to be delightfully surprised as I was. The plot twisted and turned into resolution in the nicest package. I even found myself shedding a tear. However, it was LONG. Unlike August: Osage County* which also ran for three hours plus, it did not speed by and I did not feel exhilarated after, but the ending was worth the wait.

*Get your tickets for August now because when the strike is over and the show resumes playing, you will not be able to get tickets.
at 8:15 AM

Sarah, I'm dreading the long haul aspect of Cymbeline to be very honest. And as for buying tix for August: Osage County, do you know something we don't about when this strike will conclude?

I've decided to take the most optimistic stance possible: shows will be back to normal on Tuesday the 20th!

Sarah, While you'll be enjoying Barbara Cook, I've taken your advice and will be taking in Cymbeline in lieu of August: Osage County come Tuesday evening.

Loved Cymbeline - it's the most satisfying performance of a Shakespeare production I've ever seen.

I'm so glad! My review was mixed, but there are elements that I cannot forget. The bottom of the first act was one of the most visually stunning moments I've ever seen on a stage.