LIGHT THE LIGHTS, CURTAIN UP: THE STRIKE IS OVER!!!!!

The stagehand union strike is over! Broadway will be back on Thursday night. After 19 days of a walkout that cost the city and the Theater District tens of millions of dollars in lost revenue and earnings and forced dozens of shows to go dark, an agreement has been reached between the Broadway stagehands and the American League of Theatres and Producers. Now I can see August: Osage County again! 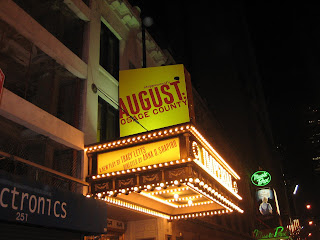 You're so lucky to be able to see "August: Osage County" again. It's such a raw, honest, emotional play. The dialogue is just so biting and witty. Even though I don't have as dysfunctional a family (and who does!) elements of that play really spoke to me. And I think Tracy Letts writes remarkable roles for women.