Look Sally, Marian was in The Ginger Man! 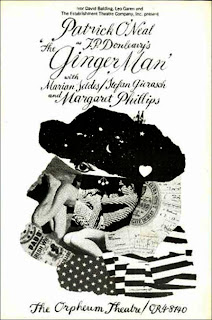 Sally and I were at O'Neals last night. We go all the time, but last night we made quite a discovery. Long ago, Sally filled me in on the history of O'Neals, once known as The Ginger Man (stick with Sally and you'll learn things). It was owned by the late, great Patrick O'Neal. She knew he was an actor and I remembered I had seen him in some shows and movies (watch any of the great 70s and 80s tv shows and you'll see him). It was rather crowded last night and our usual spot was taken. From our perch with a different view, we were able to see the window card of The Ginger Man that is framed above the bar cash register. So, yes, O'Neal's was previously known as The Ginger Man...bingo, he was in the US premier of this J.P. Donleavy play in 1963...and one of his co-stars was Marian Seldes! Revelation!

And while everything seems different when we're sipping cocktails poured by our favorite barman Steve, I think it's a sign. Send your checks in now for a production of anything for our dear Marian!
at 8:28 AM