Joy tonight! It's Susan Graham with the NY Phil.

Click here to read the PlaybillArts article about this gig. Suzi is knocking on wood that she'll hit those two high B flats. Of course, we have no fear about that and we're even prepared for the heart-stopping bit too. And the best part of the article is that she'll be recording this piece with the Berlin Phil this spring.


Later: JOY INDEED. Susan outdid herself. She conveyed Cleopatra's angst and pain beautifully. Looking taller than ever and draped in diamonds and gems around her neck and wrist, she evoked Cleopatra in a sparkling burgundy gown. The piece itself is gorgeous and Susan's rendition was breathtaking. Lucky me will be treated to this again on Saturday night. It will not be soon enough! 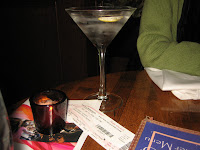 At O'Neals' we sat next to Alice Coote and her friends. They had also come from seeing Suzi. We're seeing her in Hansel & Gretel at the Met on January 23rd. I previously saw her in Giulio Cesare In Egitto in Paris and I can't wait to see her again.

One good thing about sitting in an upper tier in any house is being able to see past the hordes of strings - the brass! I especially love watching the horn players. My complaint about the Phil's horn players is that they are usually all very old white men. Last night I was thrilled to see two women among them, and one was quite young! Coincidentally, the young woman was at O'Neals' too. She's Cara from Lubbock, Texas. She said she's just subbing, but I'd like the Phil to age down and sex up their horns.
at 8:58 AM