Tonight: Hansel and Gretel at the Met 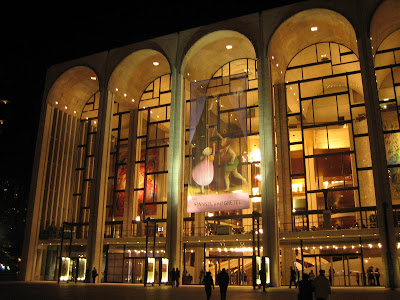 Humperdinck's score is just about the most beautiful and delicate I've heard. The difference between the music and the staging was absolutely jolting. The production was dark, menacing, gross, ugly and ridiculous. But the music itself made up for it. Christine Schäfer and Alice Coote have beautiful, beautiful mezzo voices - so light, so sweet. (They sound so much like Susan Graham - anybody up for The Three Mezzos? Send me money. I'll produce it.) Philip Langridge as the manwitch (Noah's word) was funny but strange. What was that staging? He was a cross between a mad Julia Child and Mrs. Doubtfire with a touch of Mrs. Lovett. I found him to be humorous, but on the disgusting side. There was a quite obscene and lecherous moment when he held "her" wooden spoon at his crotch. Huh? And this was a production that was supposed to be geared for children. I can't imagine that the very little kids who kicked our chairs during the entire first act really got anything out of this production. It was a fairly empty house so we moved from the top of the family circle to the top of the balcony where, bonus gift, we sat next to Lois Kirschenbaum!

Finally, I had a conversation with Miss Lois. It was like meeting Yoda. I've been going to Met performances and Carnegie Hall and Avery Fisher Hall concerts for nearly five years and I hardly remember being in an audience that hasn't included Lois. She is a character to love, staunch in her devotion, dedicated to seeing everything possible, having her mementos signed to prove she was there. She recently celebrated her 50th anniversary of seeing the Metropolitan Opera, which I congratulated her on, which coincided with her 75th Birthday. Her friend Matthew Epstein (former artistic director of the Chicago Lyric) threw her a party, "It was his brainchild." At that party, a who's who of opera performers (including Renée Fleming, Marilyn Horne, James Levine, Aprile Millo, Sam Ramey, Julius Rudel, Eugene Kohn, Victor De Renzi, Elisabeth Carron, and so many more) joined in the celebration and sang "Happy Birthday" to her which was, she said, "beyond thrilling." Over the years, she has seen almost everyone and almost every production. If she's not at the Met, she's at the 92nd Street Y, or Carnegie, or Avery Fisher, as she says, and I aspire to this as well, "It just depends on what's on." She doesn't go to City Opera much anymore, "I was very angry with them for a long time. When I started going there and sitting in the 5th ring, it cost 65 cents! Then they raised the prices. A few years ago it was up to $65. For 5th ring! I complained and complained and finally somebody heard me. Now, it's $16 so I'm seeing a few things there. I'm seeing King Arthur on a Sunday afternoon matinee. I don't like matinees, but it's the only time I have and I don't recall ever seeing a production of it." That's saying something, because Lois has seen just about everything. She is famous for her love affair with opera beginning with Tebaldi. "I saw Tebaldi in Boheme and I was hooked." I asked her who she likes these days. "Oh, it's hard to choose one, I like them all, but I guess my favorites would have to be Renée Fleming. And of course, Placido. And oh, Susan Graham. You're in for a real treat next season when they bring a staging of the Damnation of Faust to the Met with Susan and Pape returns. Oh I love him. But he's not so nice off stage. Believe me, he has his moments." I told her that I bet my friends that I could get his autograph and she replied, "You caught him on a good night." She asked me what I see and I told her an opera or two a month and she laughed at me. I redeemed myself with adding my Carnegie and Avery Fisher Hall schedule, however I lost points over Broadway. She said, "It's just too expensive. I've been a member of TDF for years, but there's not much for me to see these days. What do you recommend? What about Osage County?" I did recommend August: Osage County to her and told her that I would be seeing Sunday in the Park with George on Friday. "Oh, believe it or not," she said, "I don't like Sondheim that much. I didn't like Company at all. But I did like Sweeney Todd if it's a good cast and there have been some good casts. I saw A Little Night Music at City Opera but the sound was so horrible." I asked her what she did on Tuesday night and she said she went to Marilyn Horne's Master Class at Carnegie. No need to teach Lois anything, I thought to myself, she knows it all. What will Lois be up to next? She was going to go to Dawn Upshaw's Master Class on Thursday night but her friend called her and told her that the Tucker Foundation is having some sort of concert at St. Patrick's Cathedral at 6:00 but she would call first and find out. She's seeing Barber on Saturday night, a production she emphatically does not like, "All those damn doors remind me of Noises Off on Broadway. I hated that so much. I wanted to leave but it was so dark and I can't see so I was afraid I would fall when I was leaving." Oh Lois, if I experience half of the adventures in entertainment that you have over the last fifty years, I'll be quite blessed.
at 6:49 AM

What a lovely tribute to a genuine lady. I love that she sees productions she already knows she doesn't like -- that's a true, heartfelt devotion. Beautiful!

Schafer isn't a mezzo; she's a light lyric soprano, and a very good one. But the three mezzo idea is wonderful. Keep Coote and Graham and round it out with a nice hearty sound, like Borodina or Blythe. Or if you want to keep with the more lyric mezzos, DiDonato.

Oh my bad, Cameron - Thanks for letting me know about Schafer. A great addition would be DiDonato. I'm pretty sure it's true that Mezzos Always Have More Fun and now that Suzi's a blonde, surely she's doubling up on the fun. Send money! Let's do it!